For Taylor Gruenwald ’16, “Love where you live” isn’t just an inspirational mantra — it’s a way of life.

Gruenwald enjoyed growing up in St. Bernard, a charming one-square-mile village surrounded by Cincinnati on three sides, but she always wanted to venture elsewhere for college. As a teenager, she forged a path to Ohio State through the Evans Scholarship, a full tuition and housing scholarship for high-achieving golf caddies.

Gruenwald has always demonstrated a willingness to pour time and energy into her goals. At 13, she pursued a summer job as a golf caddy at Cincinnati’s historic Maketewah Country Club. Long days on the links felt even longer when lugging heavy golf bags. But she was spurred on by the knowledge that no other female caddy had lasted more than two seasons at Maketewah. She made it five.

The bigger reward, though, was the Evans Scholarship she earned to attend Ohio State, where she began as a pre-med student before discovering an elective in city and regional planning that would change her path. “That was when everything clicked for me,” she recalled. Instead of competing with one another, her interests in areas as varied as social work, business, architecture and public policy coalesced around a single goal: to create cities and spaces where people can flourish.

Under the guidance of professors such as Kyle Ezell, whose introductory course in the Knowlton School sparked her interest in the field, Gruenwald learned the nuts and bolts of city and regional planning. Looking back, she credits her semester-long studio classes for providing practical, real-world experience.

“I’ve always loved tight-knit communities with urban density, so I was drawn to the studio classes that involved a downtown component," she said.

In her most memorable studio class, taught by Bob Oast, she devised a plan for downtown Fostoria, a small town of some 13,000 residents in northwest Ohio. Gruenwald and her classmates connected city leaders with funding sources and presented short- and long-term plans for restoring a business district hollowed out by job losses and recession.

“Through projects like these, the city and regional planning major gave me a tactile approach to solving problems,” she said. “I began to look at the world through the lens of a planner.”

Effective developers strike a delicate balance between opposing forces, Gruenwald learned in her years at Ohio State. “We don’t want to gentrify to the point where we displace long-term residents, while at the same time, we have to be open to change and progress,” she said. In the Midwest, known more for rolling farms and sprawling suburbs than vibrant urban centers, she is passionate about extolling the benefits of dense, walkable communities that attract newcomers while preserving the history and character of neighborhoods.

After graduation, Gruenwald relied on the skills she developed in her city and regional planning major to build community back in Greater Cincinnati. While she never expected to return to St. Bernard, she landed a job after graduation at The Port, an economic development agency geared toward revitalizing neighborhoods in Hamilton County. Armed with practical planning experience from her classes, she worked to balance new development with community preservation. 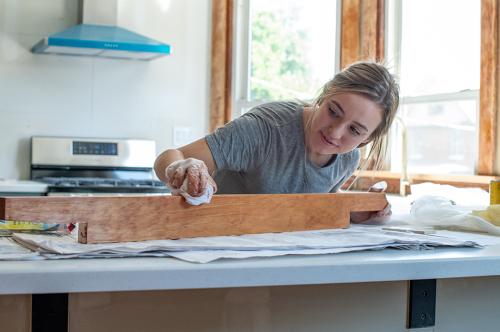 These days, Gruenwald spends most of her time working toward more dense, walkable communities as a developer at an integrated property development, construction and management company called The Model Group. Outside of work, she volunteers with the St. Bernard Community Improvement Corporation (CIC). The nonprofit serves as the village's designated economic development agency and acquires and repositions blighted land and buildings to promote healthy development.

In addition to large-scale development, she’s also passionate about home renovation, and she’s spent the past year breathing new life into the duplex in St. Bernard where she lived for most of her childhood. With the help of an army of friends and family, she transformed the duplex that’s been in her family for three generations. Chronicling that odyssey led to a whole new community — on TikTok, where she has built a following of 480,000 people who value her expertise and common-sense advice.

Whether she is advising the St. Bernard CIC on a local development project or finishing renovations on her duplex in preparation for future tenants, Gruenwald draws inspiration from the potential she sees all around her. “I plan to keep contributing to revitalization efforts however I can,” she said. “Now that I’ve experienced how rewarding it is to engage a community and cast a vision for the future, I don’t see myself stopping anytime soon.”

A music teacher’s path to listening to the skies