Nearly 65,000 Ohio State engineering and architecture alumni live, work and volunteer in communities around the world. Buckeye engineers and architects are everywhere! Meet some of our notable alumni. 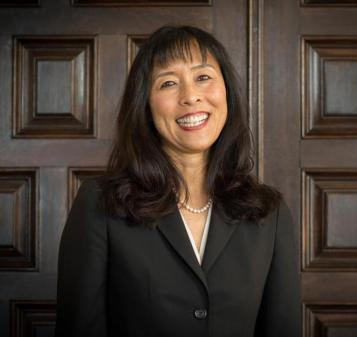 When Jacqueline Chen—one of the few women in the mechanical engineering program—walked into Ohio State’s placement office in the early 1980s she received an offer that would forever change her life. Sandia National Laboratories gave Chen the opportunity to apply for its graduate One-Year-on-Campus Program for women and minorities, which included a summer internship prior to starting the master’s program.

Chen did just that, completing a summer internship at Sandia’s Albuquerque, New Mexico, lab, and earning her master’s from the University of California at Berkeley in 1982. Nearly 40 years later, Chen is a senior scientist at Sandia National Laboratories, leading a computational combustion research group. She is also the principal investigator of the Department of Energy’s (DOE) Exascale Computing Project on turbulent combustion. Read more... 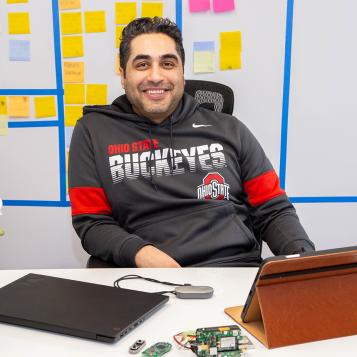 When Ali Rahimi ’14 and his family immigrated to the U.S. from Iran for a better life, he never dreamed he’d one day return the favor for Ohioans with disabilities. The computer science engineer’s plan to pursue a career in animation and game development changed after he met Patti Ruble, a social worker disabled at age 12 by polio, for a social science assignment. 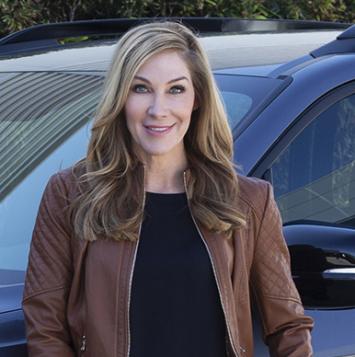 In the driver’s seat

She became Honda’s first female chief engineer in North America and most recently led the development of the all-new 2019 Honda Passport. Harrington is proud of her trailblazer status at the company and hopes it shows other women—especially girls—that they too can have a successful, rewarding career as an automotive engineer. Read more… 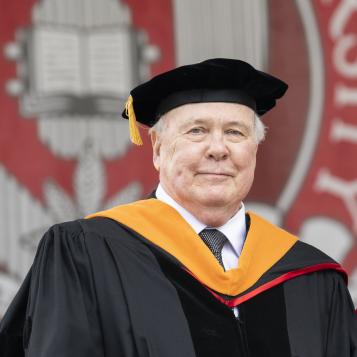 While studying architecture at Ohio State in the 1960s, George Acock never dreamed he’d have a significant and lasting impact on its physical landscape. Today, his work can be seen across the university’s Columbus campus, from the renovation of Thompson Library to the creation of the North Residential District. In May, Acock received a University Distinguished Service Award in recognition of his exceptional service to his alma mater. 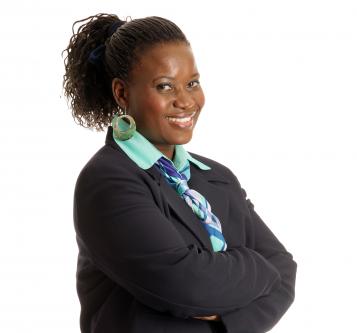 Growing up in the rural South African village of Kopela, alumna Margaret Mkhosi never imagined that she’d become an engineer—let alone the first female nuclear engineer in her homeland. Today she leads the National Nuclear Regulator’s Center for Nuclear Safety and Security in South Africa and mentors other women so they too can be successful in STEM.

Kopela was so remote, the schools lacked critical resources like computers and labs. But thanks to a supportive family and mentors, Mkhosi later became the third woman to earn a PhD in nuclear engineering at Ohio State.

Inspired by the difficulties she overcame, she vowed to help other women also succeed in STEM careers. She mentors women of all ages, including many girls from Kopela. Read more... 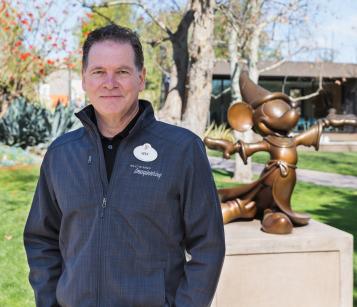 Making Disney magic from the ground up

Since 1997, Morosky (’81, landscape architecture) has led the Landscape Architectural Studio responsible for Disney Theme Parks and Resorts worldwide, including retail, dining and entertainment districts. He directed the design and development of numerous notable and award-winning projects, including Anaheim’s Downtown Disney, Hawaii’s Aulani and Hong Kong Disneyland.

Creating highly immersive attractions and experiences that transport guests to a world of fantasy begins with storytelling, Morosky said, which is interwoven into every facet of the experience. Read a Q&A with Jeff. 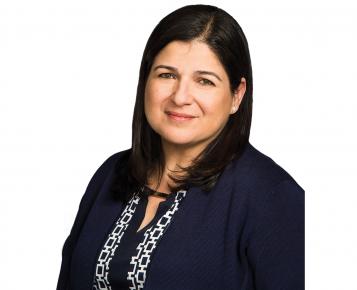 With more than 30 years of experience in leadership roles at industry giants like Microsoft, Motorola and AT&T, alumna Maria Martinez knows what it takes to succeed in the high-tech business world. As Salesforce’s president of Global Customer Success and Latin America, this Buckeye engineer is passionate about helping the company’s customers and her team define and realize their own ambitions.

Martinez (MS ’81, computer engineering) was attracted to the field of engineering because it was relatively uncharted territory back then for women, not to mention her love of “how engineering drives innovation and sets the pace for change.” Named one of the 50 Most Powerful Latinas in corporate America in 2017, Martinez is most inspired by helping future generations, especially women and other underrepresented groups, find their own path to success. Read a Q&A with Maria. 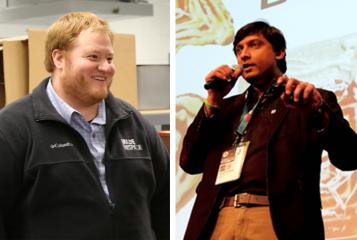 Since its origin in the early 1980s, 3-D printing has evolved into a tool with limitless possibilities. Now, two enterprising Buckeye engineering alumni are leading efforts to make 3-D printing commonplace in two places you might not expect: the final frontier and your favorite pizzeria.

As chief engineer and co-founder of Made in Space—the startup that designed and built the first 3-D printer ever to operate off-Earth—Michael Snyder (pictured on left) is realizing a lifelong ambition. Meanwhile, Anjan Contactor (pictured on right) used his experience as co-inventor of NASA’s 3-D food printer for deep space missions to co-launch Beehex, which designs and builds commercial 3-D food printers controlled by their proprietary software and mobile app. Read more… 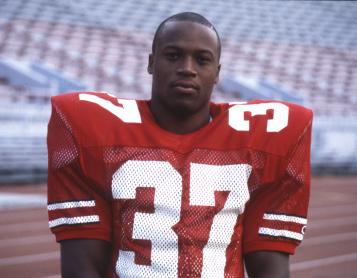 William White’s ('92) football career was the stuff of dreams—four years as a starting Buckeyes’ cornerback, followed by 11 seasons playing in the NFL. Yet, the accomplishment he values most is becoming an engineer.

And as he tells kids and future football hopefuls alike, anyone willing to work hard enough can follow in his footsteps and have a successful career—in STEM (science, technology, engineering, math and medicine).

White spreads his passion for STEM as midwest region vice president for Project Lead The Way. The non-profit aims to engage K-12 students and teachers in STEM by providing hands-on, project and problem-based curricula for students and training for teachers. Read more... 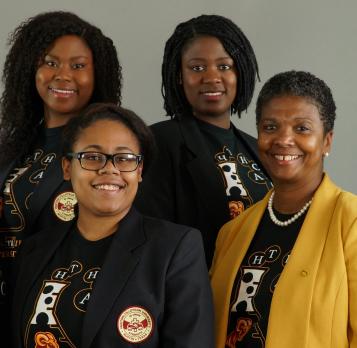 Leading a private liberal arts college might not seem like the perfect fit for an industrial engineer, but the engineering education she gained at Ohio State helped alumna Colette Pierce Burnette feel well-prepared for the role. In 2015, she became the sixth president and chief executive officer of Huston-Tillotson University, a historically black institution in Austin, Texas. She’s the first female president of the merged institution and only the second female leader in the university's 140-year history.

Now she hopes her story—of an inner city child who became an engineer and a college president—will inspire Huston-Tillotson students to find their own passion and purpose. Read more... 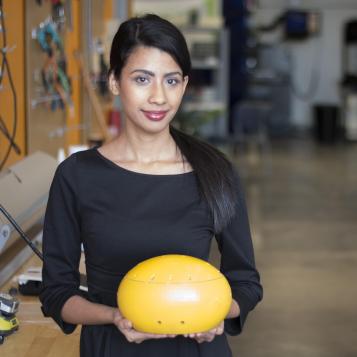 Bhattacharyya was named to Forbes 30 under 30 Class of 2016 for Manufacturing/Industry, an honor that recognizes bright, young change agents. And in her spare time, she co-founded an international non-profit. Read more... 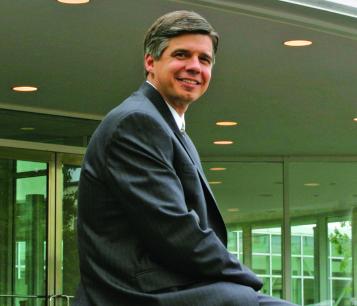 From conducting the first satellite television transmission in the 1960s to more recent advances in airborne collision avoidance systems and space surveillance, MIT Lincoln Laboratory has remained on the forefront of developing technology for national security for the past 64 years. Buckeye engineer Eric Evans has been at the helm of the historic research laboratory since 2006, guiding its strategic direction as well as the overall technical and administrative operations. 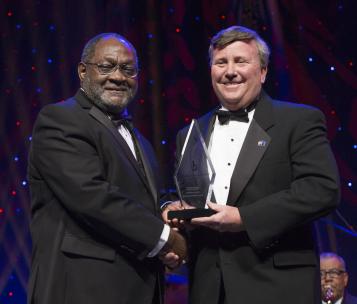 Once called a foolish dreamer by his junior high school classmates, Ernest Levert has proven that with determination and talent, dreams do come true. Even as a child, Levert (pictured on left) wanted to make an impact on the world. During his 28-year career at Lockheed Martin, the welding engineering alumnus (’82) has done just that, pioneering new welding innovations that impacted programs ranging from the ground to the seas, and even to outer space.

As a Lockheed Martin Fellow at Lockheed Martin Missiles and Fire Control in Dallas, Levert applies his welding engineering expertise to solve technical challenges across the corporation, leads training for production operations and conducts research for new projects. Read more... 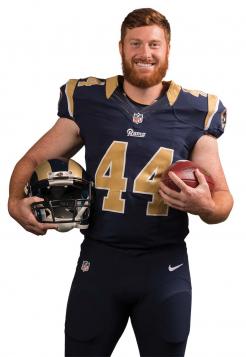 Alum Jake McQuaide has one of the world’s most unique occupations. As the starting long-snapper for the NFL’s St. Louis Rams, he’s on the field for every punt, field goal and extra point. Since NFL teams only have one long-snapper on the active roster, he’s one of just 32 people in the U.S. who can claim that job title.

What makes McQuaide '11 even more unique is that he is a proud alumnus of Ohio State’s aeronautical and astronautical engineering program. It’s probably safe to say he’s the only NFL long-snapper who can run a transonic wind tunnel research project to test dynamic stall on a Blackhawk rotor blade.

Now in his fourth season with the Rams, the College of Engineering’s favorite NFL player fondly recalls his days as a Buckeye engineer and as a player wearing the scarlet and gray in the Rose Bowl. And while he’s vibrantly living his dream of playing football for a living, his idea of a dream job after he hangs up his cleats may surprise you. Get to know Jake... 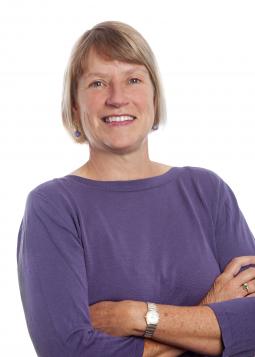 Pulling the pieces together: Nancy Dawes

What do Pringles potato chips, Duncan Hines Cookies and Olay Total Effects have in common? They’re three Procter & Gamble product lines that have benefited from the talents of skilled innovator and Buckeye chemical engineer Nancy Dawes.

Described as one of the country’s foremost experts in the development of advanced skincare products, Dawes (’81, chemical engineering) has spent her entire 33-year career working in several P&G branches, from food product development to global beauty.

While a love of chemistry led her to major in chemical engineering at Ohio State, it was the challenging curriculum that kept Dawes’ interest. She credits the university with preparing her well and instilling a skill critical to having a successful engineering career. Read more... 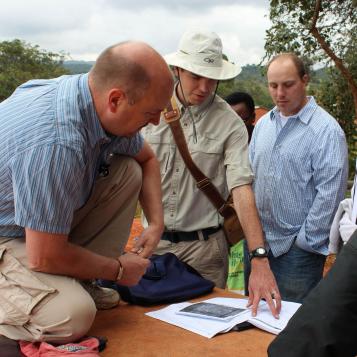 Alum tackles water crisis one pump at a time

Greg Bixler never set out to build a groundbreaking water pump or start a humanitarian engineering organization. But once the mechanical engineering alum heard about the life-threatening water issues the world’s poorest inhabitants face, he couldn’t turn away.

Bixler (left, wearing hat) is co-founder and CEO of Design Outreach, the volunteer-powered humanitarian engineering organization that invented the LifePump. Unlike traditional hand pumps that tap out at 162 feet, the LifePump can pump water from more than 500 feet deep. The three-time Buckeye grad aims to inspire students to go out into the workforce and come up with solutions for the world’s poorest people. Read more... 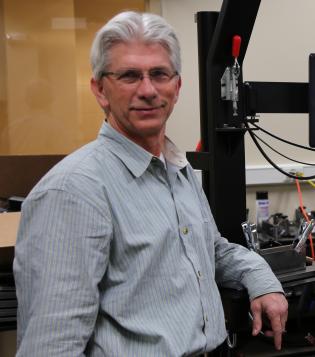 When it comes to welding, explained Bill Forquer, you have to burn to learn. As CEO of RealWeld Systems, the computer science and engineering alumnus leads a team of talented Buckeye engineers who aim to transform welding education by making sure that burn time is as instructive as possible.

RealWeld Systems is the startup behind the RealWeld Trainer, the first and only welding trainer on the market designed for use in the welding booth under real-world conditions. Using motion capture technology, the system monitors and measures a welder’s performance and provides immediate feedback on motions, adherence to welding-parameters and whether bonds are being made in a metal’s sweet spot. Read more... 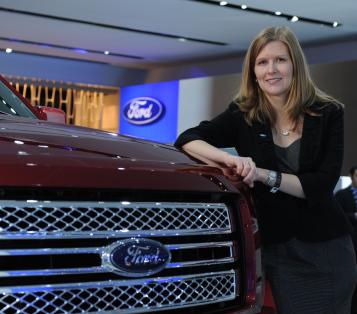 Jackie Marshall DiMarco, chief engineer for the longtime best-selling Ford F-150 pickup, downplays being the first woman to hold the position in the truck’s 60-plus years of production. Women fill about 20 percent of engineering jobs at major automotive companies. That figure has remained steady in recent years, she said, noting that the percentages are lower for women at the management level of the firms.

DiMarco studied mechanical engineering at Ohio State, with an eye to working in the biomedical or construction industries. But it was her involvement with the university’s Center for Automotive Research during her junior year that defined her future. Read more....