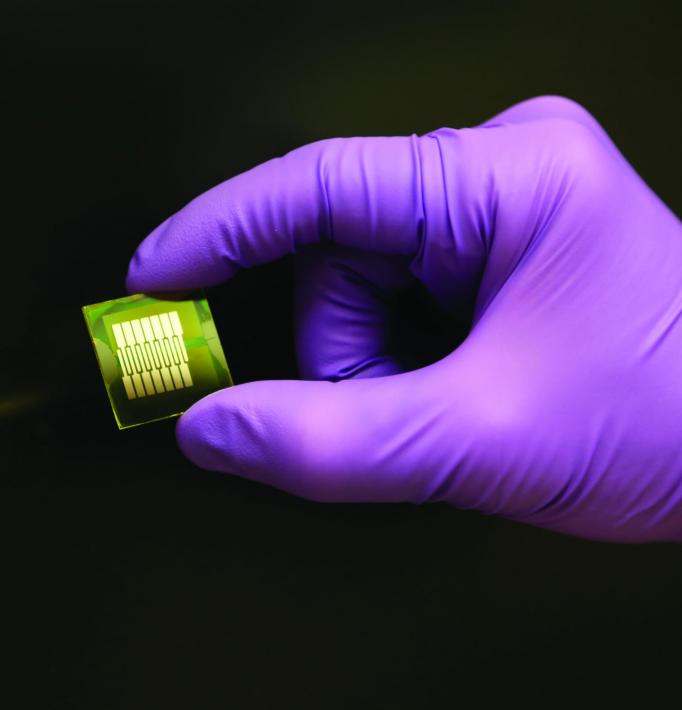 The challenge of protecting shoppers’ credit card data could be dramatically improved with equipment as basic as a high-end ink-jet printer and changing the way secure information is communicated between shoppers and retailers, according to Paul Berger, professor of electrical and computer engineering and physics at The Ohio State University.

As a result of Berger’s research into plastic semiconductors and a concept called quantum tunneling, major breaches of customers’ personal and financial data – which can occur during purchases as a result of stolen credit cards and hacking – could become a thing of the past.

After several major breaches of consumer data from credit and debit cards recently, data security is a hot topic in the media and at the dinner table. The most notorious incident happened to Target, which announced in January 2014 that hackers had managed to hijack account information of more than 70 million customers as it was transferred between the retailer and financial institutions.

Berger says his cost-effective solution involves creating a new kind of credit card that integrates a robust hardware algorithm and user data directly into the card’s plastic. This differs from current approaches, which store data on magnetic strips or in implanted, comparatively expensive silicon chips.

“Instead of having red, green and blue inks in a printer, you have plastic semiconductor materials dissolved into a solution, much like paint,” Berger said. “You print it using a modified inkjet printer, the solvent evaporates and you’re left with regions of semiconducting, semimetallic and semi-insulating plastics to 3D print the computer.”

The resulting card becomes a simple computer storing a hardware scrambling encryption algorithm that--when combined with a customer PIN and the time and date of purchase--creates a unique hack-resistant encrypted key that is only valid for a few minutes.

An easy, affordable mass production capability means printed plastic semiconductors have huge potential. Instead of installing expensive silicon microchips into the cards, Berger’s process is more comparable to the way newspapers are printed.

Creating these remotely powered plastic computers requires energy-thrifty circuits, which can be made by combining plastic transistors with a phenomenon called quantum tunneling, in which electrons ‘tunnel’ through another material. As silicon semiconductor devices continue to get smaller, greater numbers of electrons are able to tunnel through. Usually, industry views tunneling as undesirable, but Berger sees it as an opportunity.

By creating special tunnel diodes, current is only allowed to pass through the material at restricted energy levels. These smaller diodes operate at a much lower voltage, which creates significant space and power savings.

The eureka moment for Berger’s idea came about in 2005, as the result of undergraduate researcher Sita Asar’s experiment while building solar cells using plastic. Asar had read about someone who had achieved greater degrees of energy extraction in solar cells by incorporating a thin layer of titanium dioxide onto one interface. She tried that technique, and when Berger looked at the resulting data, he noticed a small ‘bump’ – the result of a ‘negative resistance effect’ caused by quantum tunneling.

Now, Berger and several colleagues are researching the potential applications of quantum tunneling and plastic semiconductors with funds from the National Science Foundation. His collaborators include Donald Lupo, a professor in the department of electronics at Tampere University of Technology in Finland, and Gary C. Farlow, a  professor at Wright State University in Dayton. Berger said Finland is a natural partner for the research because the country has expertise in plastic semiconductor printing and roll-to-roll processing expertise.
The idea of storing data directly in the credit card is not new. Many financial institutions are moving toward high-tech EMV cards, which have the embedded silicon microchips that securely store customer data.

Such cards are widely used in Europe, but have not caught on in the U.S., in part because manufacturing costs are so high. Berger’s plastic semiconductors would provide the same security functionality of EMVs with silicon chips at a fraction of the cost.

“We could be in the marketplace very, very quickly, perhaps in two to three years,” Berger said. “Given the black eyes the current system in America has been getting, banks and retailers are finally realizing they need to do something.”