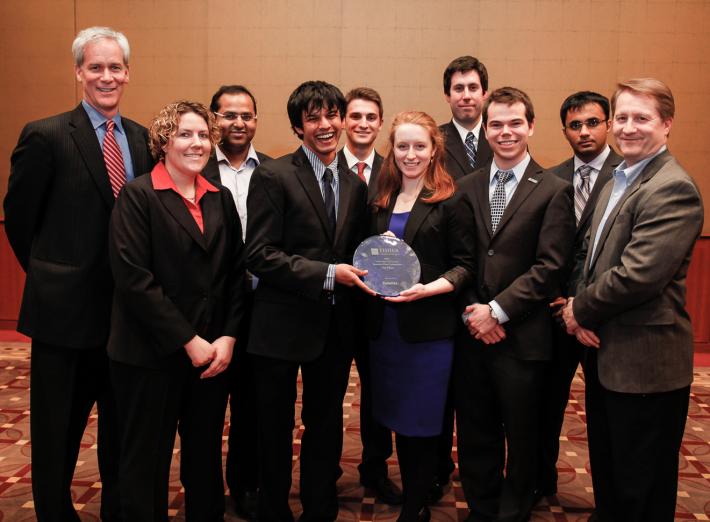 Kinshuk Mitra had his sights set on attending The Ohio State University long before he arrived in the United States from Chennai, India. The third-year biomedical engineering student’s sights are now aimed at growing his newly-launched company, OncoFilter, based on new technology he developed that captures multiple types of tumor cells in a single device. The idea is to create a robust and more effective way to detect cancer, earlier than current tests allow, which increases the survival rate of those diagnosed with the disease. As of now, separate tests must be used for different cell types, which slows down the diagnostic process.

“The product came out of the necessity to come up with an idea for the Pelotonia Fellowship. It was $12,000 and I wanted to win it,” Mitra said. “The idea was a transmutation of what I was doing in a lab back then. I was using microbubbles — what we now know are beads — to chase down cancer cells. The notion was instead of having the beads go through your body, have the cells go through a device.”

The beads Mitra uses are polystyrene, like the packing foam used to ship products. But they are 100 microns each, the diameter of a strand of hair. By adjusting the size of the beads and placing them within a microfluidic chip, they can capture the larger cancer cells (called circulating tumor cells) while letting the healthy, and smaller, red blood cells flow through the beads’ gaps.

“You can catch these cells, separate them and do genomic tests on them and you can personalize the beads with the antibodies that are personalized to each patient,” Mitra said. “It’s kind of like a Swiss army knife” with its multiple utility.

“In terms of real information, it tells the surgeon if the cancer is in Stage 2 or 3 for instance. And it can tell the surgeon whether surgery is a better option for this patient or chemo or a chemo cocktail is better suited.”

Because of collaboration, OncoFilter went from merely a good idea to incorporation. Mitra began having conversations with his lab’s principal investigator, clinicians and surgeons. He was introduced to Michael Tweedle, Radiology professor and the Stefanie Spielman Chair in Cancer Imaging, who became OncoFilter’s chief scientific advisor, and to Biomedical Engineering Associate Professor Ronald Xu, who is on the company’s scientific advisory board.
“The idea of an inexpensive blood screen for, say, breast cancer or ovarian cancer, is highly compelling,” Tweedle said, “and, as two of my heroes, drug hunters Paul Janssen and James Black, once said at a conference, ‘We don’t kill projects.’ If it is worth doing, then you keep at it until you succeed. More than anything else, I am convinced that Kinshuk and his team will be a success. The technology may even change as it refines.”

Mitra also was introduced to Ohio State’s Technology Commercialization and Knowledge Transfer Office, who paired Mitra with an entrepreneurship team of MBA students from the Fisher College of Business.

“This is a very young, energetic, creative and self-motivated team,” Xu said. “They did more than I expected and kept bringing me exciting news. They have a very firm goal, a very clear action plan and know how to utilize the available resources for their success.”

Trapping cancer cells could be just the starting point for OncoFilter. Mitra is intrigued about using the device for detecting antibiotic drug resistance — a growing problem in the medical community. The OncoFilter technology need not change for this new application, and each microfluidic chip is inexpensive, no more than 40 cents each to make.

“I can capture bacteria much like I capture tumor cells,” Mitra said. “I can coat the beads with drugs, and I watch the bacteria get stuck to the beads. If the bacteria dies, the bead with that drug is a candidate drug for further testing. If it survives, I’ll know there’s a better drug I need to look for.”

Mitra’s OncoFilter work is currently funded with $70,000 in grants from the Wright Center for Imaging (via Tweedle), The Levinson Foundation at the Massachusetts Institute of Technology and the Ohio Tech Angels Fund, part of Ohio’s Third Frontier program. The business side of OncoFilter has raised $100,000: Part Fisher College business plan winnings and part angel investors who were consulted when the OncoFilter team competed in Rice University’s $1.3 million business plan competition (the team won the Shark Tank competition, the non-investment round, but no money).

But money is the easy part, Mitra said; the challenge is finding the brainpower to help with the technology along the way. The team will start pre-clinical trials for ovarian cancer in the fall and should get its first batch of samples for testing in February. If the initial testing proves “appetizing,” Mitra said, he plans to continue to the next phase by June 2014 at MD Anderson Cancer Center in Houston, where he has collaborators waiting.
“I see this being an amazing learning experience that should morph into something more realistic in terms of the company,” Mitra said. “You can do it at Ohio State, and it’s one of the best places to do it.”
Categories: ResearchStudents