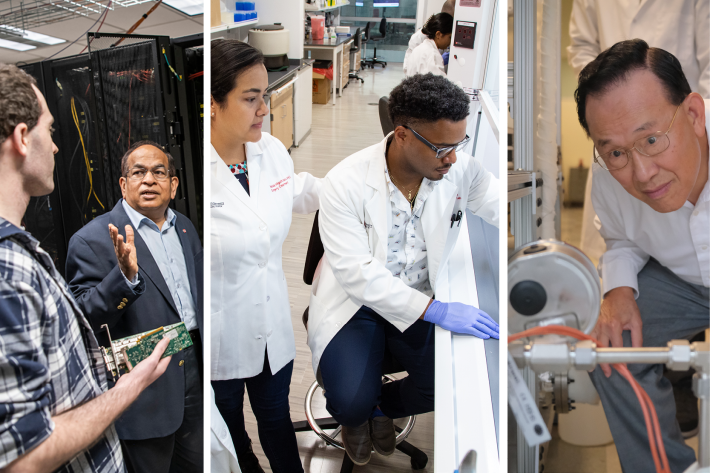 The new total reflects a 21% increase compared to last fiscal year’s total of $133.79 million. Federal agencies, such as the National Science Foundation, Department of Energy and National Institutes of Health, contributed $100.91 million to the fiscal year 2022 total, while industry partners funded collaborative projects with $50.53 million. Research grants from the State of Ohio, non-profit foundations and other sources combined for an additional $10.99 million.

“While setting a record is fantastic, what really matters is the innovation catalyzed by these investments,” said Dean Ayanna Howard. “Through groundbreaking, convergent research, our faculty, staff and students are addressing societal challenges and improving people’s lives.”

Highlights in fiscal year 2022 included the establishment of two new NSF National Artificial Intelligence Research Institutes at Ohio State. The AI Institute for Intelligent Cyberinfrastructure with Computational Learning in the Environment (ICICLE) and AI Institute for Future Edge Networks and Distributed Intelligence (AI-EDGE), both led by Ohio State engineering faculty, will each receive a total of $20 million over five years.

Ohio State also received a $15 million grant from the NSF to lead the creation of an interdisciplinary institute and establish a new field of study that has the potential to transform biomedical, agricultural and basic biological sciences. The Imageomics Institute will utilize machine learning methodologies to extract biological traits from images, such as the physical appearance of an individual animal or distinguishing skeletal structure of a species.

Additionally, an interdisciplinary team captained by engineering faculty leads one of 10 projects funded by the U.S. Department of Energy to transform the way communities use energy. As part of the “Connected Communities” effort, Ohio State received a $4.2 million grant to be used over the next five years.

Industry-sponsored research funding increased significantly since fiscal year 2021, a 47% jump from just below $34.4 million to more than $50.5 million.

Cisco and Ohio State recently launched a research collaboration to develop and advance key technologies, engaging researchers in Ohio State’s Colleges of Engineering and Arts and Sciences. In spring 2022, the first round of projects began, focused on mutual priority areas such as cybersecurity, information and data management, and networking.

Ohio State also became home to the first Schaeffler Hub for Advanced Research Program in North America. Located inside the Center for Automotive Research, the collaborative program will focus on solid-state electrolyte battery development with future plans for fuel cell research and development.

Financial support from nonprofit foundations also grew. A collaboration with the College of Nursing to use extended reality, artificial intelligence and machine learning to revolutionize nursing education received a $1.5 million grant from the American Nurses Foundation’s Reimagining Nursing Initiative.