For computer science and engineering major Parth Parekh, it was pretty easy when he was a kid to dip his toe in the waters of STEM (science, technology, engineering and math). He enjoyed a variety of opportunities in class, after school, and in the summer to have fun while learning about coding, robotics and engineering.

But that’s not the case for many kids. So Parekh and his Underwater Robotics teammates at The Ohio State University chose to do something about it.

About 18 months ago, the Underwater Robotics Team (UWRT) submitted a proposal to the Ford College Community Challenge, a global grant competition that empowers college students to envision and lead change in their communities. The proposal outlined an after-school STEM program for underserved middle schoolers in Columbus. Ultimately they weren’t chosen for the grant, but the idea of an underwater robotics workshop lived on.

“The STEMbot Outreach Program has turned into an avenue for us to interact with the community around us,” Parekh said. “There’s not a lot of STEM education opportunities for many kids. We had robotics teams and camps when we were younger, so we want other kids to have these kinds of experiences.”

The team developed “build your own” underwater robot kits as inexpensively as possible – about $2,500 for a class of 25 students working in small teams. Cost containment was important, Parekh said, because corporate sponsorship is central to the program’s sustainability and expansion.

The after-school program was piloted from late January until early March with sixth through eighth graders at Rosemore Middle School, about 15 miles east of campus. UWRT members visited the school five times in that span to help students build and code a real underwater robot from scratch. Thanks to a donation from ExxonMobil and an Ohio State Outreach and Engagement grant, the program was free to the school.

“Each visit had a different focus,” Parekh explained. “For example, our first day was all about mechanical engineering concepts like buoyancy, center of mass and propulsion, and explaining how this thing they’re building will float and move around in the water.” 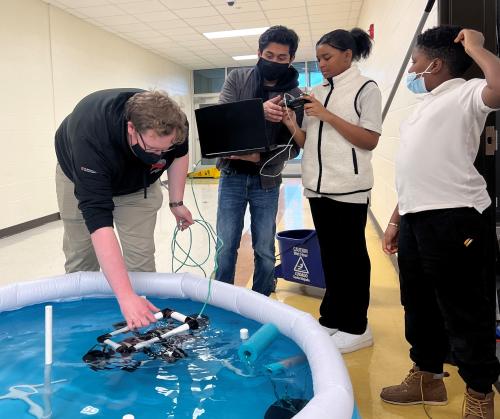 Over five weeks, each team of Rosemore students designed, built and drove their own remotely operated vehicle propelled by four thrusters and controlled via a Raspberry Pi microcontroller. On the last day, the students competed in an underwater obstacle course inside a small inflatable pool to see who could navigate the fastest.

Electrical and Computer Engineering Senior Lecturer Saeedeh Ziaeefard, UWRT’s faculty advisor, said this effort also expands the team’s scope beyond just competing against other universities at events like RoboSub coming up in July. UWRT’s more than 50 student members now can choose to focus their time on competitions, research projects or K-12 outreach.

As for what’s next, the team is already planning another STEMbot workshop at Rosemore Middle School next spring semester. And Parekh and Ziaeefard are both thinking about expansion.

“Right now we are trying to find more schools, more sponsors and more team member volunteers to offer this workshop to more kids,” said Ziaeefard. “This pilot program was so successful, we want to see it grow.”