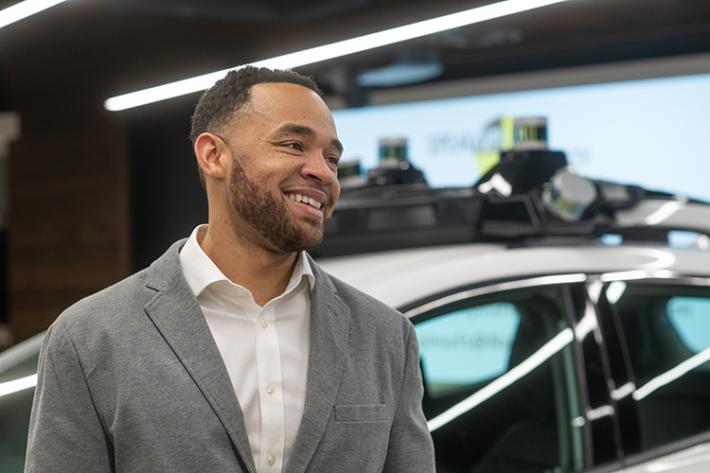 Charles Muse had never been to The Ohio State University when he took an official tour of the Columbus campus as a high school student from Chicago.

Muse arrived for that visit with his father and a pair of crutches, which were needed because of a knee injury the teenager suffered while playing in a pick-up basketball game the previous night.

Even now, more than a decade later, the details of his initial day at Ohio State remain vivid to Muse. Faculty, staff and students welcomed him by responding to his plight. Their aid and concern continued throughout his visit and made a profound impression on him.

“They didn’t know me, but they were all coming together to help me,” Muse says. “They put me on a golf cart, held my crutches, held my backpack. It was like, ‘We’re all Buckeyes here; we’re all a family, and we’ll treat you as such.’ It all felt so small, close-knit. A light bulb went off for me – this school is different. I knew this was exactly where I needed to be.”

Muse went on to earn a bachelor’s degree in aeronautical and astronautical engineering at Ohio State in 2013. He’s now helping to transform vehicle transportation as program engineering manager for electric trucks for General Motors (GM) at a time when the entire auto industry is shifting away from internal combustion technology. President Biden’s executive order in August calls for half of all vehicles sold in 2030 to be electric.

Still, even though he’s busy shaping the future, the past isn’t forgotten by Muse, who was honored in February with the “Most Promising Engineer Award” at the national Becoming Everything You Are (BEYA) STEM Conference.

Muse credits his positive experiences and the campus-wide support he received at Ohio State – notably at the Hale Black Cultural Center and the Todd Bell National Resource Center – for setting him up for success at GM, where he’s held a variety of roles for a decade dating back to two undergraduate internships.

“Ohio State has a plethora of resources,” Muse said. “For me, that was key. I always had somebody to go to. I hit overwhelming moments several times, almost on a weekly basis in college, and I was able to figure out – through those resources that were available – who to talk to at what times. That allowed me to be successful by tackling problems a lot more efficiently and effectively.

“As I was navigating these complex problems, engineering homework, classes and courses, I had a good host of people there helping me along the way. I had different perspectives. I had different support systems. They really taught me the ability to think critically, and they taught me the soft skills that I needed to be able to create families near me wherever I go.”

Muse currently takes an active role in Ohio State’s extended family. He contacted the university in 2020 about becoming a mentor. The Department of Mechanical and Aerospace Engineering program put him in touch with two of its undergraduate students, Zoe Karabinus and German Rafael Paez Garcia.

“I didn’t know what to expect,” said Paez Garcia, a native of Spain who later graduated in the spring with a degree in aerospace engineering. “I felt maybe since he’s an American he’s going to think, ‘Oh, I got stuck with the international guy.’ But from the beginning, Charles was very friendly to me. We really bonded, and he was very helpful. It meant the world to me because I knew he’s super busy and didn’t have to do this. He chose to do this.”

Muse, now 30 years old, met individually with Paez Garcia and Karabinus by Zoom every two or three weeks – and kept in regular touch other ways – throughout the 2020-21 academic year.

“It has been really great to go to him and have a younger perspective,” says senior Zoe Karabinus, who plans to continue meeting with Muse for a second year. “He knows what it's like being young and in this field. He understands where I’m at. He has done a really great job of focusing on my worth for who I am, not what I look like to others or how I come across.

“It certainly makes me very proud that this program has brought us together. I am immensely grateful for the opportunity to have this connection with Charles because of how much he's made an impact on my professional and academic career.”

Muse believes everyone has a “societal duty to pay forward” and that Buckeyes naturally put that call into action.

He experienced it on his campus visit and throughout his time as an undergraduate student.

Now as an alum, he feels it wherever he goes.

“The culture (at Ohio State) is a magnet that draws you in and allows you to build not only a team, not only friends, but a family,” Muse said  “I absolutely believe in it. That feeling of community is not limited to campus. It’s nationwide; it’s worldwide. You have a family – a feeling that we’re all Buckeyes.”