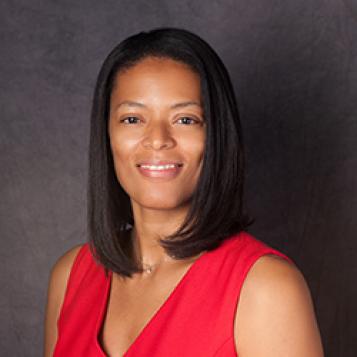 Biomedical Engineering Associate Professor of Practice La’Tonia Stiner-Jones has been promoted to associate dean of graduate programs after having served as assistant dean since 2015.

In her previous and current roles, she provides leadership of graduate affairs and professional development for graduate students and postdoctoral trainees. She also oversees strategic recruitment of graduate students with a focus on increasing diversity, including an annual Graduate Engineering Open House.

“I am excited to continue working together with all my colleagues as we build upon what we have created and learned to provide excellence in our education, training and support to graduate students and postdoctoral scholars,” said Stiner-Jones. “I look forward to us taking it to the next level.”

Stiner-Jones is the director of a new consortium created by The Ohio State University and the U.S. Air Force to increase opportunities in the Air Force for minority STEM students and graduates. The six-year, $40 million project, funded by the Air Force Research Laboratory (AFRL), will include summer internships for minority engineering students, access to specialized research equipment and laboratory space, and support for projects in collaboration with historically black colleges and universities and other minority-serving institutions. Ohio State will also work with minority institutions in developing technical proposals for research funding and will work collaboratively to create lasting infrastructure that encourages diversity in Air Force hiring.

“I was delighted that Dr. Stiner-Jones was already here when I arrived in March,” said College of Engineering Dean Ayanna Howard. “She is a natural leader. We have big plans for our graduate program, and this promotion reflects our confidence in her abilities to drive growth and enhance diversity.”

Stiner-Jones also won funding for the College of Engineering’s first National Science Foundation (NSF) Research Experience for Undergraduates SITE program. She and her co-investigators aim to provide students from traditionally underrepresented backgrounds with a 10-week research immersion and prepare them for graduate school.

She is a member of the National GEM Consortium Executive Committee, which supports underrepresented minorities in obtaining STEM graduate degrees, and the recipient of the 2018 College of Engineering Faculty Diversity Excellence Award. She and a co-author received the 2019 Best Paper and Best Diversity Paper Awards from the American Society for Engineering Education for their paper citing changes to the way graduate students are evaluated for admissions.

Stiner-Jones received her Bachelor and PhD degrees from Wright State University and her MBA from Capital University. She is an immunologist, and after completing her PhD in Biomedical Sciences, she completed postdocs in neuroimmunology and psychoneuroimmunology at Ohio State. Her area of expertise is the impacts of psychological stress on the immune response. Her work has been published in numerous scientific journals and presented both nationally and internationally.