The Ohio State University Design/Build/Fly student team placed fourth in the annual Design/Build/Fly competition hosted by the American Institute of Aeronautics and Astronautics (AIAA), their best finish ever. 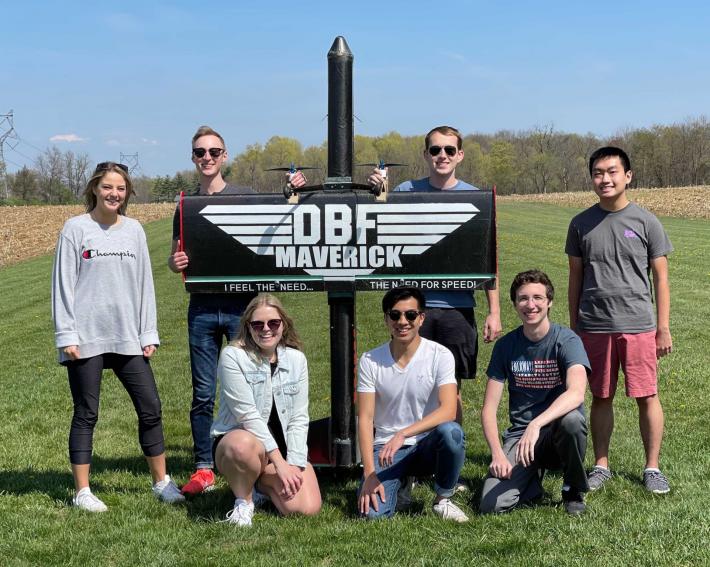 The team’s main objectives for this year’s competition were to create an electric aircraft capable of carrying a heavy payload of sensors in “shipping containers,” and to deploy and retract an independently controlled sensor while in flight. The team also had to adhere to strict competition design guidelines such as a 55-pound weight limit and a five-foot maximum wingspan.

The competition was scored in two parts: a 60-page design report and a video of the aircraft completing its mission, foregoing an in person demonstration due to COVID-19 restrictions. A panel of judges then reviewed the report and video, and averaged the scores together to decide the winner. More points were given for faster flight speeds, higher payload amounts and faster loading times achieved within various other constraints according to competition rules.

“It is very gratifying to see our team’s hard work pay off with the highest finish in team history at Ohio State,” said aerospace engineering student David Winter, leader of the Design/Build/Fly team. “At the beginning of last year, we set a goal to finish in the top 10. We exceeded our own goal by finishing in the top five.”

The team placed higher than several notable schools in the field of nearly 100, including Cornell, MIT, Purdue and Georgia Tech and the University of Southern California.

Winter believes that their prospects for next year's competition look good and hopes to place first.

“We did very well with a relatively small and inexperienced team this year,” Winter said, “so we believe that with our much larger and experienced team, getting first place in the competition next year is a very achievable goal.”

Mechanical engineering major Caleb Hawley, the recruitment chair for the Design/Build/Fly team, sees an opportunity to not only pursue first place, but bring on a group of underclassmen that can carry the organization forward to consistent excellence and promote passion for aerospace, support careers and create a positive and inclusive community.

“The Design/Build/Fly team is one of the most fun, knowledgeable and inclusive engineering groups you will find at Ohio State,” Hawley said. “Whether you have been around RC airplanes your whole life or you have never held a tool in your hand, you will feel welcome at any of our meetings. Design/Build/Fly is a place to learn, grow and apply your engineering coursework in a safe environment.”

from Dept. of Mechanical and Aerospace Engineering