Dean Howard among '20 Most Influential Academics in Smart Manufacturing' 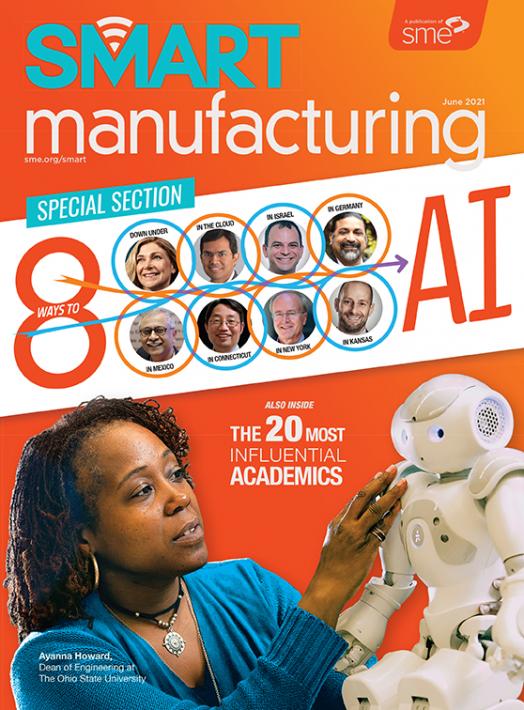 Dean Ayanna Howard has been named as one of the “20 Most Influential Academics” by Smart Manufacturing magazine published by SME, a nonprofit association committed to promoting and supporting the manufacturing industry.

The 20 leaders recognized in the publication’s June issue are educating and shaping the next generation of engineers and smart manufacturing technologists across a diverse range of disciplines.

“One of the best ways to develop the up-and-coming generation of manufacturing professionals is by exposing them to – as one of our honorees puts it – the pioneers and dreamers who are improving existing technologies and creating new ones,” said Robert Willig, executive director and CEO of SME. “Almost all of the 20 achievement-focused honorees number among their top accomplishments educating and shaping the next wave of pioneers and dreamers.”

To make better robots for enhancing productivity and safety in smart manufacturing, Dean Howard looks at how people move and act.

“My focus has been on designing methods for safe human-robot collaboration,” she said. “This involves the creation of methods to model human kinematics and behaviors, as well as developing learning methods based on human inputs.” In 2017, for example, she published a paper titled “Effect of robot performance on human-robot trust in time-critical situations,” which explored the long-term impact a robot’s performance can have on user trust.

The first woman to lead The Ohio State University College of Engineering, Howard’s career spans higher education, NASA’s Jet Propulsion Laboratory, and the private sector. She is the founder and president of the board of directors of Zyrobotics, a Georgia Tech spin-off company that develops mobile therapy and educational products for children with special needs. Throughout her career, Howard has been active in helping to diversify the engineering profession for women, underrepresented minorities, and individuals with disabilities.

Last month, the Association for Computing Machinery named her the 2021-2022 ACM Athena Lecturer in recognition of fundamental contributions to the development of accessible human-robotic systems and artificial intelligence, along with forging new paths to broaden participation in computing.

Ohio State’s College of Engineering is home to the Center for Design and Manufacturing Excellence as well as the Ohio Manufacturing Institute, and is a founding member of LIFT, one of the first Manufacturing USA institutes. In 2020, it launched a bachelor of science in engineering technology with a concentration in manufacturing, offered on the Lima, Mansfield and Marion regional campuses.

In 2020, Fontana Professor of Metallurgical Engineering Glenn Daehn was honored in SME's "20 Most Influential Professors in Smart Manufacturing" list.

The article in the June 2021 issue of Smart Manufacturing magazine includes significantly more detail on the advances and accomplishments of these exceptional researchers and educators in their own areas of manufacturing. It is available at the following URL: https://www.sme.org/smemedia/smart-manufacturing-magazine/june-2021/.