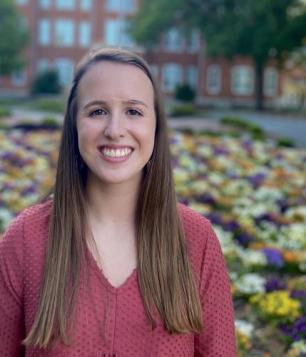 A graduate student in electrical and computer engineering won a prestigious NASA fellowship for her work in bioelectromagnetics at The Ohio State University.

Allyana Rice is currently a Ph.D. student at the ElectroScience Laboratory (ESL) located on Kinnear Road on West Campus. Specifically, she will be researching reconfigurable antennas for wearable space medical diagnostics.

Bioelectromagnetics involves studying the interaction between fields of electricity found within the living cells and tissues of organisms. Such low-power sources have the potential to transfer to man-made electronics like mobile phones, or even contribute toward radiation treatment for patients facing severe depression, hallucinations, and bipolar disorder.

Throughout the fellowship, Rice will split her research time between ESL and working under leading mentors at corresponding NASA centers. The award is presented in the form of a grant to Ohio State and includes a maximum of $80,000 in direct costs annually over four years.

Rice comes to Ohio State via Ellicott City, Maryland. She joined the ESL community at the start of the 2020-21 academic year as part of Kiourti’s Wearable and Implantable Technologies (WIT) research group. She completed her undergraduate studies in electrical engineering at Clemson University. She was drawn to Ohio State by the community and prestige of ESL.

“ESL had all of the resources I would need for graduate school as well as the name recognition to set me up for a good career after,” Rice said. “All the faculty, staff, and other graduate students I met when I visited were very welcoming and made me feel like I could be happy and successful here.”

Rice said the collaborative nature of bioelectromagnetics, with researchers spanning across numerous departments at Ohio State, ultimately attracted her to the field.

“There is also the potential to have a real impact on people's lives through the technology being designed in the group,” she said.

by Ryan Horns, Dept. of Electrical and Computer Engineering