Engineering Professors Bhavik Bakshi, Jose Castro and Alan Luo have received a combined $1.9 million from the REMADE Institute, a public-private partnership established by the U.S. Department of Energy.

REMADE is focused on the nation’s transition to a “circular economy,” where Americans can fundamentally alter how we consume materials, design and use products, and preserve and extend the life of what has already been made.

The team will develop data and models for recycling, reusing or replacing the current nylon-based barrier film used in SMCs, as well as tools to design sustainable and circular networks of the film. Research collaborators include Arizona State University, Kohler Co., and the National Renewable Energy Laboratory (NREL).

“Novel methods and software will enable selection of the best combination of alternatives based on the trade-off between economic, life cycle environmental, and circularity objectives,” explained Bakshi. “We expect that the resulting methods will contribute to reducing 6 million pounds per year of barrier film waste in the U.S. with associated savings in energy use and carbon dioxide emissions of 100 MJ/lb and 4 kg/lb, respectively.”

The team aims to demonstrate 100% use of recycled aluminum in die casting through: substituting all secondary materials for primary alloys in structural die castings with no degradation in properties; and improving the mechanical properties of the current secondary alloys for non-structural applications. This is the third REMADE project led by Luo.

“The embodied energy for secondary (recycled) aluminum is less than 4% of primary aluminum extracted from bauxite ore,” said Luo. “For this project, we have developed a technology to substitute up to 50% of primary aluminum castings by aluminum scrap. This would result in tremendous energy saving and cost reduction in the manufacturing industry.”

REMADE CEO Nabil Nasr said the anticipated results of The Ohio State University’s projects will move the U.S. closer to the nation’s energy conservation and emissions reduction targets, both of which have received renewed national attention in recent weeks.

“Our mission is to reduce energy consumption and decrease emissions, while increasing the U.S.’s manufacturing competitiveness,” Nasr said. 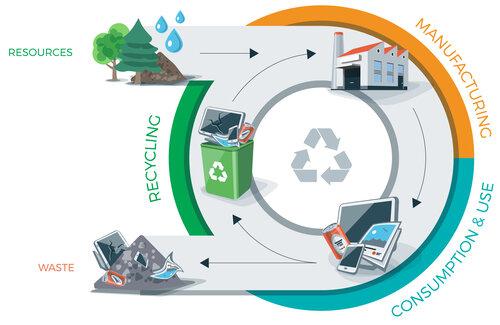 Efforts are ongoing worldwide to move from today's linear economy, where we take-make-dispose, to a “circular economy,” where we make-use-recycle. Reducing energy consumption and decreasing GHG emissions are major components of that transformation.

According to the U.S. Department of Energy, manufacturing accounts for 25% of U.S. energy consumption at a cost of approximately $150 billion. Based on data from the U.S. Environmental Protection Agency, industry is the third-largest contributor to GHG emissions in the nation at 22%.

This latest round of funding, REMADE’s fourth, brings the institute’s total number of research projects to more than 60, representing a total combined value of $63 million since the institute’s founding in 2017. Detailed information on all REMADE projects can be found at www.remadeinstitute.org.  A fifth round of funding, valued at an additional $50 million, is expected to be announced in late spring.

Ohio State is an academic member of the REMADE Institute, and Luo serves on its Technical Leadership Committee as Deputy Node Leader of Manufacturing Materials Optimization.

Solutions lie at the intersections