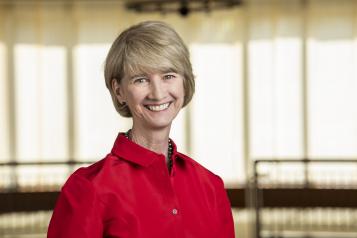 Ohio State University President Kristina M. Johnson has broken through many barriers during her career. She became the first female dean of Duke University’s engineering school, the first female provost at Johns Hopkins University, and the first woman to receive the John Fritz Medal — in 2008  from the American Association of Engineering Societies.

Recently she added another distinction: first recipient of the IEEE Mildred Dresselhaus Medal. Johnson received the recognition “for leadership and technical contributions spanning academia, government, and business.” The Dresselhaus Medal, introduced last year, recognizes outstanding technical contributions in science and engineering of great impact to IEEE fields of interest. It is sponsored by Google.

Mildred Dresselhaus was a giant in engineering, made even more notable because she was a woman during a time when women were not encouraged – and often prohibited, either blatantly or surreptitiously – from a career in the sciences. Dresselhaus, who died in 2017, was a nanotechnologist known as the “queen of carbon science” for her work, and was the first tenured female professor at the Massachusetts Institute of Technology.

"I had the great fortune to know Dr. Dresselhaus," Johnson shared in a recent issue of her weekly "Reflections of a First-Year Buckeye" email to the Ohio State community. "She paved the way for so many women faculty in science and engineering, including me."

The 16th president of The Ohio State University, Johnson has published nearly 150 refereed papers and proceedings, and holds more than 100 U.S. and international patents. In addition to academic leadership positions with the State University of New York, Johns Hopkins and Duke, she served as the under secretary of energy at the U.S. Department of Energy from 2009 to 2010.

Read IEEE Spectrum's article on President Johnson's career accomplishments that led to her being named the inaugural recipient of the Dresselhaus Medal, and on her priorities at Ohio State.

Read the Ohio State News article on her life as a scientist and academic leader.

Advancing the science and engineering of artificial blood