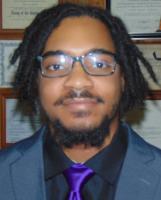 Computer science and engineering student Jourdan Jones-Peoples has been named one of four 2020-21 Martin Luther King, Jr., Scholars at The Ohio State University.

The Martin Luther King, Jr. Memorial Scholarship was established in 1970 with gifts from the Pinedale-Rochdale Student Fund, which requested that first preference be given to African American students. Nominated by members of the Office of Diversity Inclusion's Executive Council, undergraduates who are near or at the end of a remarkable academic career and have demonstrated involvement in leadership and service are considered annually for this award. Today, generous donations to this scholarship from faculty and staff afford the opportunity to recognize four of Ohio State’s most accomplished students.

Jones-Peoples’ exemplary service to others, especially his fellow students, attracted the attention of those who nominated him for the prestigious scholarship. Now in his fifth year at Ohio State, he has served as a mentor and peer leader for younger students participating in the National Society of Black Engineers (NSBE), the Program for Advancing Scholarship and Service (PASS) and the Morrill Scholarship Program. He earned and retained his own Morrill Scholarship through all eight semesters it was offered.

Influenced by his mother, Jones-Peoples enjoys helping others.

“She always told me that community service is extremely important, and that for any community you care about, you should give of yourself,” he recalled. “Even in high school, I loved hanging after school with clubs and groups that I wasn’t even a member of to help finish their projects or prepare for competitions.”

When he arrived at Ohio State, he wanted to find outlets for his community service ethos. “PASS, NSBE and Morrill Scholars were opportunities for me to help communities of students that can always use people willing to help,” Jones-Peoples said. “I’ve gained personally too. I’ve met my closest friends through volunteering, and I’ve been able to travel to new places in a mentorship role.”

Receiving a scholarship named in honor of Martin Luther King, Jr., is profound for Jones-Peoples, describing him as an ideal example of a servant leader. “His community meant so much to him that he wanted to give back, he wanted to lead the push for equality and equity.

“I want to give back because I know the adversity that Black people in America face, that Black engineering students can face,” he added. “Dr. King’s legacy and accomplishments have taught me to struggle forward so that someone else doesn’t have to struggle as hard to accomplish their goals.”

Jones-Peoples will graduate in May, and he’s excited about moving to “that state up north” in June to begin his career with Ford Motor Company.

Investing in actions for diversity, equity and inclusion