On the Wright Path: ECE undergrads navigate success in a pandemic

When twins Deontae and Deontre Wright graduated high school at the top of their class in 2019, they were prepared to make their first year at The Ohio State University a special one.

We know what happened next.

The COVID-19 pandemic turned the foundation of college life on its head this past March. Many students were forced to move home. Typical service industry and retail jobs disappeared. Friendships and relationships were put on hold and online learning became the new reality.

At the same time, some students found themselves navigating and leading nationwide protest efforts against systemic racism, instead of enjoying a well-needed summer break. 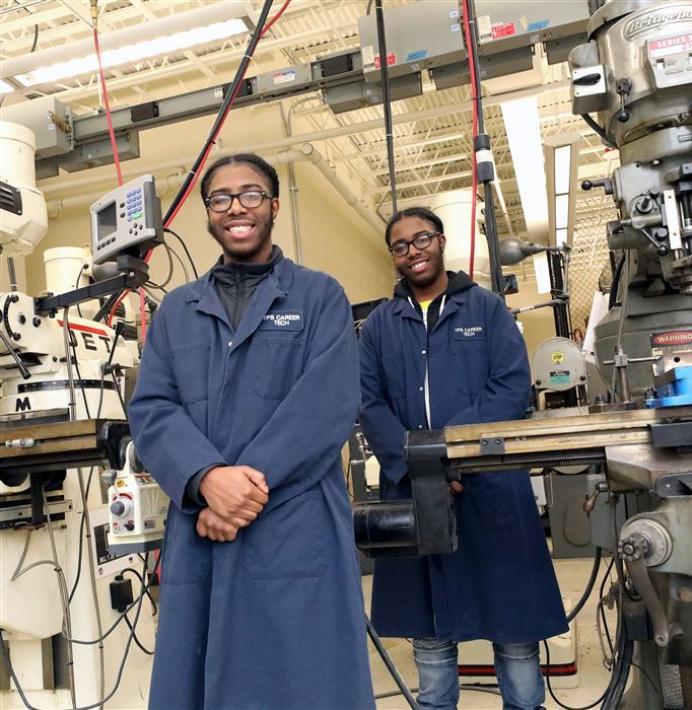 In the wake of all this, the Wrights decided to double down on a promise they made to one another many years ago.

During the summer after their sixth grade year, the twins followed their grandfather Terrence Wright around as he balanced a career as an electrician at Chrysler, while buying and restoring homes.

“He decided that our sixth-grade summer, heading into our seventh-grade year, would be a great time to start teaching us some of his trades,” Deontre said. “For the entire summer, my brother and I would wake up very early in the morning to help our grandfather redo houses he had purchased.”

In doing so, the two discovered they shared a newfound passion for electronics.

“Learning how to wire a chandelier at the age of 11 was definitely exciting,” Deontae said. “After that summer, our love for the electrical field accompanied us throughout the years that followed.”

As they became more involved in volunteering and working in local co-ops specializing in electrical engineering, the brothers launched plans of a dream to start their own business with hopes of one day making a change in the world.

“We plan to open this electrical engineering firm in our hometown, Toledo, to give other individuals growing up, attending primarily inner-city schools, a chance at learning STEM pathways,” Deontre said. “We want to increase the representation of minorities in STEM and create opportunities for students to get more involved.”

The twins said they already know firsthand how discouraging the STEM pathway can seem to students, especially those who have no idea how their talents could translate into joining the field.

“We hope to someday offer students, like us, a chance at joining something greater than ourselves. A chance to inspire others,” Deontre said.

Following the pandemic and protests, this promise they made only reaffirmed their plan.

As student jobs disappeared over the summer, the Toledo Blade caught up with the twins for their volunteer work helping children in the community.

“Our goals have not been re-orientated due to the current pandemic and ongoing systemic racism at hand,” Deontre said. “In fact, these issues have fueled us to achieve our goals even more. With the loss of fully operational jobs, and children with nowhere to go, we want to do more. It is important to us that we create a place of work not only for ourselves, but for generations to come.”

They are encouraged to see how systemic racism is a problem that society is finally facing head on, but they feel there is still a lot that needs to be done. Their goal is to help pave a path for future generations.

“The change cannot happen unless everyone tries their best at making an honest effort. My brother and I plan to make a change by creating a comfortable space that pushes for diversity in the workplace.” Deontae said. “Everyone who works hard should have the same opportunities, whether generational wealth is a factor or not. You can’t wait for systemic racism to end. You have to stand up against it and be willing to make an effort for a better future. If you don’t fight for yourself nobody will.”

As far as the teamwork needed to make it all happen, the twins are a perfect match.

"I believe what kept my brother and I, Deontae, working together as a great team all these years is our friendly competition that began at an early age. My brother and I were always taught that there may be people more smart, talented, or even stronger than you, but you can never let anyone work harder than you," Deontre said.

By taking this motto into their daily lives, the twins continue to push and offer support to one another, when needed. It ultimately helped create an even strong bond of brotherhood.

"Sometimes, obstacles could be as simple as agreeing on how to handle a situation, whether it be academic or personal, but we always managed to come together and help one another succeed. We believe that our goals and ambitions are what allow us to overcome challenges and our dreams are what keep us going," Deontre said.