Assistant Professor Enam Chowdhury and his team of engineers and physicists have been awarded a $1.056 million grant from the Air Force Office of Scientific Research.

The team will investigate how materials excited by intense laser fields behave on time scales as short as 1 femtosecond (1/1000 of a trillionth of a second) and on spatial scales as small as that of an atom using next-generation, near-single-cycle-pulse and various other laser sources and ultrafast scanning tunneling microscopes (STM).

State-of-the-art high-performance computing will be used, including new algorithms developed by the Femto-Solid Laboratory to predict and explain the experimental results. 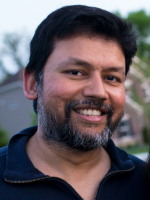 ChowdhuryThis fundamental research on extreme laser material modification and damage can be highly controlled when ultra-short time duration laser pulses are used. Such research has had a large impact on society by advancing material processing, modification, surface engineering, opto-electronics and photonics, measurement, manufacturing and surgery.

from the Department of Materials Science and Engineering