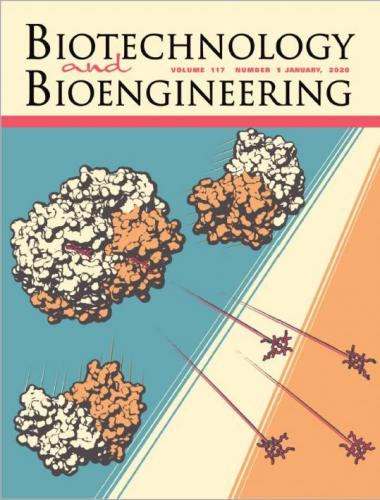 The journal Biotechnology and Bioengineering recently featured engineering research from The Ohio State University on its cover.

A paper by Chemical and Biomolecular Engineering Professor Andre Palmer's research team describes a novel method for producing apohemoglobin from hemoglobin that is superior to current methods. Hemoglobin is a protein in red blood cells that transports oxygen and carbon dioxide and gives blood its red color. Removing heme from hemoglobin produces apohemoglobin, which has the potential to carry therapeutics in its unoccupied heme-binding pockets, directly enhancing their solubility in vivo.

Biomedical applications of apohemoglobin are promising, but producing it is often expensive, time-consuming and inefficient. The new technology enables production at large scales in an efficient all-in-one system. Building on this proof of concept experiment, the team's approach also holds promise for a variety of other proteins used for research and drug delivery applications.

Palmer is a global leader in blood substitute research and engineering biomaterials for use in transfusion medicine and tissue engineering. He is currently working to develop safer, more commercially viable red blood cell substitutes that could tide patients over until they receive a human blood transfusion.

One of the problems with the use of stored blood and artificial blood is the release of heme—a byproduct of hemoglobin breakdown—into the blood stream. Heme is toxic to cells and organs, especially the kidneys, where it can lead to kidney failure. Therefore the researchers are exploring the therapeutic usage of apohemoglobin, which has the ability to scavenge and detoxify heme.

The paper marks Ivan Pires' second first-author publication as an undergraduate. A winner of the 2017 Pelotonia Research Fellowship, Pires was selected to participate as one of 15 undergraduate researchers nationwide at the NC State 2019 Future Leaders in Chemical Engineering Symposium, in addition to other research honors. Pires' ideas for researching apohemoglobin first surfaced in 2016 while working in Palmer's lab on an Undergraduate Research Office Summer Research Fellowship.

based on article by Wenda Williamson, William G. Lowrie Department of Chemical and Biomolecular Engineering