From tinkerer to scholar, Kyle DeBry’s journey to the quantum future 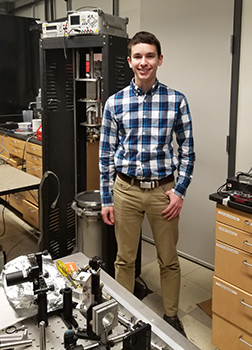 Kyle DeBry stands next to a disassembled low temperature cryostat for single-photon detectors. Located in the Physics Research Building, this is currently the main tool for his research.Kyle DeBry is a self-professed “tinkerer” — a trait that drives his passion for his engineering physics major. Raised by two biology professor parents in Cincinnati, an academic pursuit of science is in his blood.

“My parents like to joke that I went over to the dark side, studying physics, but they’ve always supported and encouraged me,” he said.

Though he was a drum major, saxophonist and theater enthusiast in high school, DeBry recognized at an early age that his professional pursuits would be science-based.

“I knew I wanted to get into physics in high school because I had a great teacher who helped me find an internship that allowed me to do experiments at the Fermi Lab in Chicago with a particle accelerator,” he said.

Those early experiences also helped solidify DeBry’s resolve to combine his interest in computer science with his indelible fascination with quantum mechanics. DeBry submitted his application to Ohio State alongside several scholarship applications to help defray the cost of his education.

“I knew that Ohio State was a big research school with a lot of resources in the sciences, which could help me access the tools I need learn more about quantum physics,” DeBry said.

Enter the highly regarded and competitive Angela Marie and Mary Francis Valentino Physics Academic Achievement Scholarship Award. The award fund was established in 2003 by the late engineering physics alumnus Michael L. Valentino ’34. Valentino was an engineer, astronomer and physicist who consulted with NASA’s Project Mercury and Apollo space programs from 1959 to 1983. 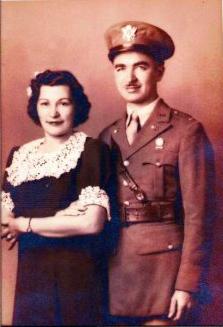 Photo of Michael and Angela Marie Valentino circa 1945. Michael Valentino served in the 20th Armored Division of the Army Signal Corps and was deployed to France and Germany.Valentino established the fund — which provides full tuition, four-year scholarships to highly talented prospective or current undergraduate students — in 2003 in memory of his mother, Mary Francis, and his wife, Angela Marie.

“The Valentino Scholarship allows us to attract the very best students to our undergraduate physics program,” said Department of Physics Chair Brian Winer. He noted that these students often go on to the top graduate programs around the country and compete for prominent national awards such as the Goldwater Scholarship, which DeBry received in 2018.

DeBry credits receiving the Valentino Scholarship as the catalyst for his academic career at Ohio State. He had offers from other schools and universities, but realized that with yearly tuition hovering around $35,000 to $40,000 per year, he would graduate more than $80,000 in debt. The Valentino Scholarship at Ohio State offered him the opportunity to graduate debt free.

During his time as a student, DeBry has flourished under the guidance of Professors Daniel Gauthier and Gregory Lafyatis. He credits them with being supportive and pushing him to try new things, reshape his research and think about his future career.

Currently, DeBry is working on a research project studying quantum key distribution and quantum machine learning. He has developed a way to fabricate superconducting coaxial cables for use in his laboratory’s cryostat to reduce the heat load on the coldest stage.

DeBry is on track to graduate this spring and plans to get his PhD in physics. He would like to work in a university setting, or within companies and startups that intend to advance the field of quantum computing.

“There is a lot of interesting work to be done [in quantum computing] to make computers that are useful for real-world problems, like simulating potential medical compounds for life-saving drugs, instead of having to test them in a lab one by one,” DeBry said.

DeBry considers the Valentino Scholarship to be pivotal to his academic career and takes every opportunity he can to pay it forward.

“Mr. Valentino’s generosity has altered my future, and so I’m interested in helping other people. I’ve recently used part of my scholarship for a course-based engineering trip to Ghana to help fix the water systems in rural towns.”

With a community of support around him both academically and philanthropically, the future is unlimited for Kyle DeBry.

by Jessi Kindsvatter, College of Arts and Sciences

Professor’s software innovations key to rise of high-performance computing and $6.9B merger