COVID-19 Update: The university remains under a state of emergency. Post-pandemic planning is underway. MORE INFO

The Ohio State University will become home to a collaborative research center focused on the advancement of plasma science—bringing us one step closer to a renewable energy source and reducing our dependence on fossil fuel.

Supported with funding from the U.S. Department of Energy (DOE), the multi-institutional center will facilitate an integrated approach to improve the fundamental understanding of plasma-aided combustion and plasma-assisted catalysis. Ohio State will receive $1.2 million of the center’s five-year, $3 million award.

In a high-speed fuel-air flow, the plasma is sustained in a cavity, to increase the flow residence time and generate sufficient amount of radicals. “We will conduct collaborative and in-depth experimental, theoretical and computational modeling studies of fundamental kinetics and dynamics of low-temperature plasmas, both in the gas phase and at gas-solid interfaces,” said principal investigator Igor Adamovich, professor in the Department of Mechanical and Aerospace Engineering. Co-PIs on the project include Professors Yiguang Ju and Bruce Koel, both from Princeton University.

Recently the DOE announced it would provide $50 million to U.S. universities, private industry and national laboratories for a range of research projects in fusion energy and plasma science. Adamovich’s Collaborative Research Center for Studies of Plasma‐Assisted Combustion and Plasma Catalysis was one of 14 projects selected for funding. The Ohio State-Princeton collaborative center is one of just four of its kind in the country started by the DOE. Other centers are led by the University of Michigan, Princeton Plasma Physics Lab and Sandia National Lab.

“Research in the important fields of fusion energy and plasma science promises both short-term and long-term benefits to industry and society at large,” said Under Secretary for Science Paul Dabbar. “These initiatives ensure that America continues to lead in these critical fields.” 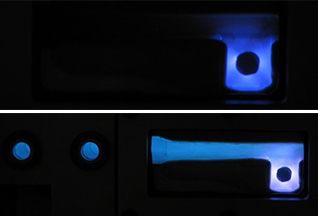 Because fossil fuels and other non-renewable energy sources will become exhausted over time, fusion energy involving plasma is a desirable, sustainable source of “clean power.” The science behind much of fusion energy research is plasma physics. Plasmas—the fourth state of matter—are hot gases, hot enough that electrons have been knocked free of atomic nuclei, forming an ensemble of ions and electrons that can conduct electrical currents and respond to electric and magnetic fields. According to the DOE Office of Science, understanding basic plasma science, including low temperature plasmas, is vital to enhancing the country’s economic competitiveness and creating opportunities for a broad range of applications.

“They react with the fuel at relatively low temperatures and initiate chain chemical reactions, which oxidize fuel species and generate more radicals,” he said. “This makes it possible for ignition at lower temperatures, and stable combustion over wider fuel-air ratios.”

Gaseous hydrocarbon fuels and hydrogen are the primary fuels under study.

Researchers will demonstrate novel methods to significantly advance the fundamental understanding of the kinetics and dynamics of energy transfer and chemistry of foundational fuel/air mixtures in non-equilibrium plasmas. Their work will also yield new insight into the catalytic reaction mechanisms, and result in development of new catalysts operating efficiently in the presence of plasma.

These outcomes will produce considerable societal benefits for energy-efficient fuel conversion, carbon dioxide utilization, low-carbon hydrogen and ammonia production, and improving the efficiency of electrical power generation, transportation and propulsion. Results could also reduce dependence on fossil fuels for producing energy and chemicals, by taking advantage of the increase in renewable electricity for catalysis.

Researchers receive $2.5M NIH grant to develop diagnostic tool for common cause of low back pain