Leading the way with smart paint

The white crosswalk in front of the Ohio State School for the Blind might look like any other, but its edges are made from smart paint—an invention that could one day help the visually impaired safely cross streets and explore cities.

Made by mixing a unique light-converting oxide into thermoplastic road paint, smart paint emits light at a wavelength unlike any other in the urban environment. When a cane equipped with a special sensor encounters smart paint, the cane detects it and vibrates. The sensory feedback can help guide people with vision impairments safely across the street without veering into traffic.

The World Health Organization estimates that 253 million people worldwide are blind or visually impaired, a figure that could triple by 2050 due to population growth and aging. Navigating intersections can be a challenge for them, with only audio walk signals, traffic sounds and tactile paving at each end of the crosswalk for guidance.

“In between those two points they're relying on the step count and the fact that they more or less know what direction that they're going in,” explained Materials Science and Engineering Professor John Lannutti. “But there's nothing that allows users to walk in a straight line right now. This technology will enable them to stay in a straight line and reach the other end of the intersection much more efficiently.”

Smart paint also has the potential to drastically improve overall mobility for those who can’t see, said Lannutti, who coordinates the multi-disciplinary team working on the project.

While there are existing technologies to help the visually impaired navigate, they’re either too expensive or don’t fully meet users’ needs. Take GPS, Lannutti said, which is designed for vehicles, not the blind. It can’t distinguish if someone is walking on the sidewalk or down the middle of a street. It also can’t provide the exact location of an entrance to a building. 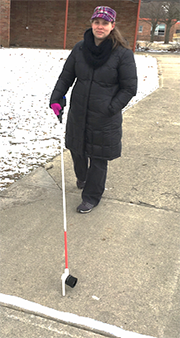 Mary Ball-Swartwout, orientation and mobility instructor at the Ohio State School for the Blind, tests the interaction between smart paint and a smart cane.With additional development, smart paint could help visually impaired people navigate cities and get to where they need to go, from the doctor’s office to a bus stop. By placing small strips of smart paint at specific destinations, the cane could recognize when users reach their desired location and notify them via a smart phone app. The app could also tell the user pertinent details, such as when a particular bus will arrive.

“Navigation for the blind and visually impaired is literally a matter of life and death,” Lannutti said. “We're hoping this technology can allow them to navigate new areas of the city and arrive at different destinations that they wouldn't normally be able to go to without a lot of painful trial and error.”

Lannutti has assembled a multi-disciplinary team, including industry, government and education partners. Collaborators include Intelligent Materials, the ceramic additive manufacturer; Crown Technologies, the company that mixes the additive with road paint; and the City of Columbus, which painted 15 test crosswalks across the School for the Blind’s north Columbus campus. Intelligent Materials is also developing the smart cane sensor that can be attached to a white cane.

On the technical side, Lannutti also leads research efforts to test the smart paint’s durability in the environment long term, including how it stands up to factors such as sunlight, salt and snow plows.

“There are a lot of unanswered questions because no one has actually put these special oxides out into the environment before,” said Lannutti. “We’re trying to look at the basic science and understand, from the materials perspective, what changes as the smart paint is used, especially in terms of whether or not it can still be detected.”

At a cost of just 20 percent more than standard road paint, smart paint is expected to be an affordable option. The team predicts that the smart cane attachment will also be economical.

The innovation is already generating significant interest. Both the state of Delaware and fellow smart city Tampa, Florida, plan to test smart paint. Closer to campus, The Ohio State University Airport repainted select runway markings to enable testing of the system’s ability to prevent operations vehicles from crossing runways that are in use.

For Lannutti, it’s been rewarding to work with the school’s students and staff, as well as so many passionate volunteers focused on improving mobility and independence for the visually impaired.

“We dropped the version 1.0 of the smart cane at the school and students were able to try it out in protected environments,” Lannutti explained. “They’re very excited.”