American soldiers are skillfully prepared for violent engagement with enemy forces. An Ohio State University engineer wants them to be just as prepared when they are critically wounded in battle. 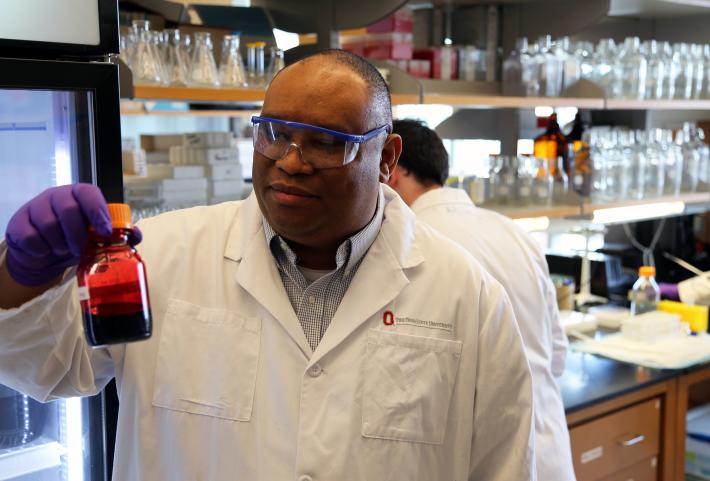 To date, there are no effective treatments for addressing massive blood loss on the battlefield other than blood transfusion, which is logistically not feasible during field casualty care. Based on years of research, Palmer’s lab is working on a novel resuscitation therapy to maintain oxygen delivery to limit tissue hypoxia, inflammation and organ dysfunction. A form of artificial red blood cell, their polymerized hemoglobin (PolyHb) has shown promise in stabilizing hemorrhage through injection of less than half the volume of lost blood in small animals. PolyHb’s significantly reduced weight compared to multiple liters of conventional resuscitation fluid could enable a medic to carry field treatments for more than 10 soldiers, at least doubling their current capacity.

A National Academy of Sciences and Institute of Medicine report found that of all the injured soldiers who die before they can be transported to a medical facility for treatment, hemorrhage is the single major cause of death in potentially recoverable battlefield casualties.

“The greatest opportunity for reducing mortality and morbidity of field casualties involves fluid resuscitation and recovery of oxygen delivery to tissues,” said Palmer. “The PolyHb fluid therapy being developed in our laboratory not only provides a potentially lifesaving intervention to hemorrhagic shock, but also reduces the logistical burden on combat medics.”

While red blood cell substitutes are not meant to be a permanent replacement for whole blood, which serves many different functions, the advantages of a therapy like PolyHb are significant. They provide a stopgap of approximately 24 to 48 hours—enough time to get a wounded soldier from the battlefield to a medical facility, for example.

Palmer added that the PolyHb fluid also has significant and widespread potential for medical preparedness efforts and capabilities in civilian mass casualty situations, such as mass transportation accidents, natural disasters or from terrorist attacks.