A sun-washed beach adjacent to Ohio Stadium. A braid of bridges and paths weaving from campus to downtown. Bicycles and modern trains zipping along a path once carved by a major highway.

President Michael V. Drake started the effort by asking how to better connect the city and Ohio State as the university was developing Framework 2.0, the campus master plan.

“One of the things that is an interesting feature on our campus is the Olentangy,” Drake said. “[It] looked like, in some of our drawings, like a barrier or an impediment. And we wanted to reimagine what we think of that space. To look at it as a high-quality water feature that helped to enhance the quality of our enterprise and the quality of the university.”

Last month, a dozen current Knowlton School architecture, landscape architecture and city and regional planning students worked over a two-day period with representatives from architecture and design firms NBBJ, West 8, REALM, TLS Landscape Architecture and MKSK. Split into three teams, they presented Thursday to a packed auditorium at the school. 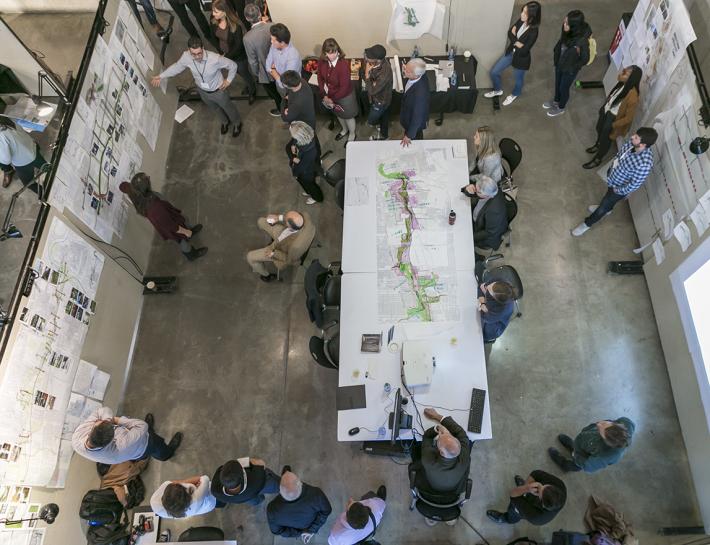 “They came here thinking this would be a competition and instead it turned into a collaboration,” said Jay Kasey, senior vice president for Ohio State’s Office of Administration and Planning.

Columbus Mayor Andrew Ginther noted that the present and future success of the city depends upon collaborations like the charrette process.

“As we think about the future development of the Olentangy corridor, we must work together to find the best growth solutions for this area,” Ginther said.

The demise of State Route 315 was the key to the NBBJ team proposal. The team envisioned a more robust Cannon Drive, a re-imagined Olentangy River Road and a series of enhanced greenways throughout the corridor.

In place of the current highway, the group designed 315 as a multimodal corridor that included light rail, high-tech bike paths and even a downtown connection to a Hyperloop linking Columbus with Pittsburgh and Chicago.

The design opened up more parkland and greenspace along the corridor and connected both campus and the route to downtown to the river.

The TLS/MKSK team’s design centered around four ideas that they said could be completed in about a decade. The plan included a second Olentangy bike trail on the opposite side of the river and a series of unique pedestrian bridges spanning the river from one end of the corridor to the other.

They also proposed fixing problematic connections through the area by re-aligning Olentangy River Road near Kinnear Road and connecting Souder Avenue in Franklinton with Olentangy River Road. The plan included emphasizing “pulse points” at Confluence Park and along the riverfront near Ohio Stadium and shared-use corridors that could incorporate autonomous shuttles, light rail and bike paths.

The team lead by West 8/ REALM envisioned Columbus a generation into the future. Their design ideas included tapping into more than 850 acres of potential greenspace between the main campus and downtown, redeveloping Confluence Park and adding new walking and bike paths.

“It’s not about the vehicle at all. It’s about the pedestrian,” said Claire Agre, a principal and senior landscape architect at West 8. “We want to make the best bikeway in the world.”

One element included a so-called Buckeye beach near the stadium to give students access to the river in a unique way.

Much like the collaboration that produced these designs, the university partnered with several city organizations to make the charrette a success. The Columbus Downtown Development Corp., the Columbus Partnership, Nationwide Realty Investors, MORPC and the City of Columbus sponsored the effort.

None of the projects is ready to go beyond the dreaming stages. The charrette was the kind of thought experiment a modern land-grant university can undertake when it has the prominence and connections of Ohio State.

“I think both the mayor and President Drake were excited about the numerous ideas,” said Keith Myers, Ohio State’s associate vice president of Planning and Real Estate. “As these ideas get circulated, we’re likely to get more and even different ideas. And I think ultimately, what you hope, is that these find their way into specific projects that really help shape Columbus for the next century.”

The full presentation is viewable online.

Solutions lie at the intersections