Advancing vehicle-to-vehicle communication in a convoy

A new project at the Center for Automotive Research (CAR) will demonstrate the effectiveness of the next step in autonomous and connected vehicles: convoys of vehicles that can communicate with each other as well as a human driver.

“This will be a very clean example of partial automation,” explained Arda Kurt, research assistant professor in the Department of Electrical and Computer Engineering. “We are looking at suburban to highway speeds with human drivers who will control the steering.”

The test will be conducted at the Transportation Research Center (TRC) near Marysville, Ohio. Access to the TRC provides CAR researchers with a great resource to conduct tests for internal research, student research and general education purposes.

In this experiment, a two-vehicle convoy with human drivers will communicate using radio signals shared between the cars. When a third vehicle approaches, the vehicles in the convoy will open a space between them and tell the other car to join them. The human driver will receive a signal from the vehicle to change lanes and join the convoy.

“We work with high-level decision making and control,” said Kurt. “This test is a simple scenario.”

The human-driven leader car is also broadcasting basic safety messages directly to the other vehicle. The follower car controls its own speed based on information received from its leader while a human driver controls steering. 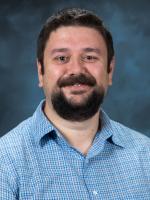 “It’s basically like a radar-guided, adaptive cruise control (ACC) in higher-end cars, which has a distance control,” said Kurt. “If the car in front of you slows down, your car slows down.

“While we are doing this, we’ll also put advanced sensors on these cars—such as laser scanners, 3D range finders—so the vehicles are also recording and generating maps of their environments as they go. We’re not actually going to be using [this data] in real time, but we’ll look later at other sensing and mapping questions.”

One question for future study, for example, involves the sharing of information from the vehicle with advanced sensors to a car that can receive data, but is perhaps not equipped with sensors. Can the information be shared in a sufficient way so that every car in a convoy can make better-informed decisions?

“The idea of cars with different capabilities is an important one,” said Kurt. “Some cars can add communications.  We will start with collecting data during this lane change experiment, and then we will process that data offline in a lab. These are the maps these cars generated, how can we use them? How can we form a group situational awareness?”

One of the highway situations that may eventually be assisted using this data could be compressed slow-down, which Kurt refers to as the “slinky effect.”

“Cars travel for miles on highways and then one car slows down—who knows —which makes the other cars slow down. This propagates because people are reacting to each other. If cars can know this is coming, you can all slow down together. The entire string of cars is stable because the cars know more about what’s happening in front of them.”

After proving the safety of three vehicles in a convoy, a future scenario could involve moving the convoy through an intersection as a unit.

“If the vehicles can talk to each other, and the destination is programmed in, all of the cars at an intersection can predict which way vehicles are turning, and can more efficiently send vehicles through the intersection,” said Kurt. “In the future, we could let automated vehicles travel through as a convoy rather than making each one stop and take turns. Can we make that happen safely? How do you make sure human drivers also understand that the convoy moves through as a unit? They are breaking the traditional rules of an intersection, but maybe rules will need to be changed.”

For now, the team will start with a small convoy to try out vehicle communication in cars that are partially automated and exchanging of information.