Blood. Our lives depend on it. But even here in the U.S., where millions of people donate it annually, a critical red blood cell (RBC) shortage is looming. By 2030, the shortage could reach around 4 million units a year, according to an analysis of data from the 2011 National Blood Collection and Utilization Survey. Factor in around 5 million RBC transfusions taking place every year, along with the acute need for RBC transfusions due to accidents and natural disasters, and you have a serious problem that jeopardizes surgery, trauma and chronic illness patients, as well as soldiers injured on the battlefield.

An Ohio State researcher, however, has a goal of helping solve this problem. Andre Palmer, chairman of the William G. Lowrie Department of Chemical and Biomolecular Engineering, is working to create safer, more commercially viable RBC substitutes that could help save lives. His research is gaining attention, and recently Palmer received his third R01 grant from the National Institutes of Health (NIH) in 2016, bringing his total R01 funding to $5.5 million.

Two four-year grants totaling $2.9 million were funded in September 2016 from the National Heart, Lung, and Blood Institute and the National Institute of Biomedical Imaging and Bioengineering. One funds research focused on facilitating oxygen delivery to tissue-engineered constructs for applications in regenerative medicine, while the other is focused on developing a safe and efficacious RBC substitute for use in transfusion medicine. Palmer’s team includes co-PIs from the University of California-San Diego and Rutgers University.

In December, his third NIH R01 was funded with $2.6 million over four years. The proposal he and fellow chemical engineer and co-PI Jeff Chalmers submitted outlines production of a more uniform unit of packed RBCs for use in transfusion medicine, with a goal of processing blood so it’s safer for patients. The research will leverage the intrinsic magnetic properties of hemoglobin—protein component of RBCs responsible for oxygen and carbon dioxide transport and exchange—to facilitate the separation of RBCs from unwanted cell-free hemoglobin and hemoglobin containing microparticles. Case Western Reserve University’s Maciej Zborowski is also a co-PI.

While blood substitutes are not meant to be a permanent replacement for whole blood, which serves many different functions, the advantages of artificial RBCs are significant. They provide a stopgap of approximately 24-48 hours—enough time to get a wounded soldier from the battlefield to a hospital, for example.

They can be used universally by people with any blood type, and are stable at ambient temperatures up to several years without loss of activity, whereas human RBCs have to be discarded after 42 days of cold storage. RBC substitutes also are free of new, unidentified pathogens that can unwittingly be passed on to patients, as happened before the AIDS, Zika and H1N1 viruses were discovered.

Palmer’s RBC-related research extends beyond these latest grants. His lab is developing artificial blood plasma and RBC storage solutions to help extend the shelf life of human blood beyond the 42-day FDA-mandated timeline. He is also working on a drug delivery system to target macrophages and monocytes (types of white blood cells) in blood.

Palmer’s recent successes are milestones on a journey that he believed would lead to a straightforward career in chemistry. The only member of his family who was interested in science, Palmer began studying chemistry at Howard University, but two years into the program, he found that he wasn’t satisfied.

“I discovered a passion for research and a desire to develop new materials for applications in medicine,” he said, “so I switched to chemical engineering. Creating things is powerful, and the idea of taking chemistry and scaling it up into processes for making biomedical materials was very appealing to me.”

After being accepted to Johns Hopkins University for graduate work in chemical engineering, Palmer approached his advisor, Denis Wirtz, and asked if he could start early on research. “I was very eager, and very interested in research,” Palmer recalled. “So much so, that I was willing to give up my summer vacation, and just get right to work in the lab.”

He studied the mechanics of cytoskeletal protein networks, a field which he enjoyed but did not have many immediate translational possibilities. His productivity and determination allowed him to obtain his Ph.D. in just three and a half years, during which time an idea within him began to grow. After his six-month post-doc, he decided that instead of continuing on in his advisor’s field, he would risk everything and pursue his own unique career path.

“I really enjoyed working with Dr. Wirtz,” Palmer said, “but I wanted to distinguish myself with my own research and ideas. So I set out to select a biomedical problem that could be investigated with core chemical engineering principles, but which was not well explored by chemical engineers.

“The three main pillars of chemical engineering include chemical kinetics, transport phenomena, and thermodynamics. I asked myself, ‘What problem could lend itself to all three areas?’ It was difficult coming up with an answer.”

Around that time, Palmer had been reading the works of Charles Drew, an African American who contributed significantly to the establishment of blood banks in the U.S. Drew’s work inspired Palmer to focus on blood; specifically, engineering better RBC substitutes. He looked at various companies who were trying to commercialize RBC substitute products and observed that they were not utilizing optimal materials, and very few engineers were working to improve them.

“Why not engineer RBC substitutes for safer and broader clinical use? The ‘human’ aspect of it, the implications of such a project, were interesting and would have major societal impact,” he said.

Having never performed research on RBCs and hemoglobin before, he read massive amounts of literature, went to RBC substitute conferences and reached out to prominent people in the field.

“Scientists in the field were very friendly and responsive to young investigators,” he recalled. Palmer still works with some of those early contacts, like Marcos Intaglietta and Pedro Cabrales at the University of California at San Diego.

“I was convinced it was important work, so no matter what, I was going to stick with it,” he said.

During this time, Palmer learned more about the limitations of RBC substitutes. Cell-free hemoglobin originating from ruptured RBCs leads to blood vessel constriction, high blood pressure and oxidative tissue injury due to the tiny hemoglobin molecules being able to penetrate into nearby tissue and depositing highly reactive iron. 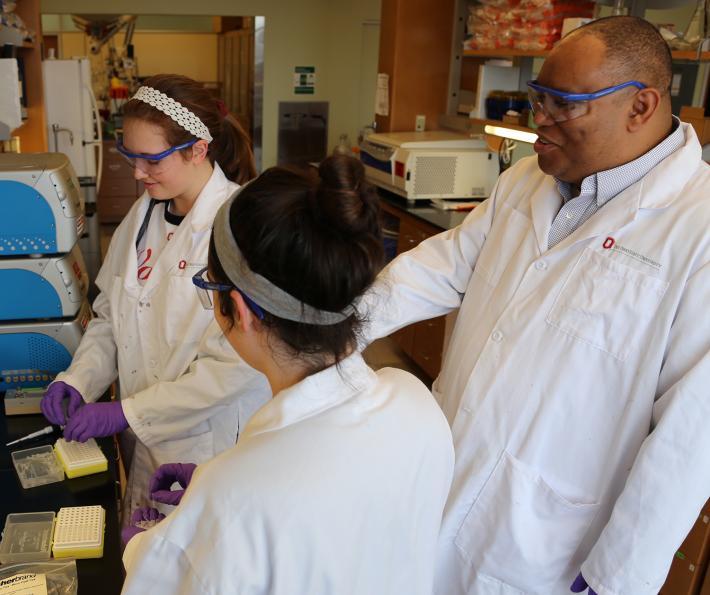 In order to create a safer and more commercially-viable RBC substitute, he had to find a way to reduce these side-effects. “Why not just increase the diameter of the hemoglobin molecule so that it is unable to cross the blood vessel wall into the tissue space?” he recalled thinking. “I could make different sized hemoglobin molecules and see how they behave in vivo until the optimal size is determined.”

Ways to increase the diameter of hemoglobin include polymerization, conjugation of polymers to the surface of the molecule and encapsulation of hemoglobin inside sub-micron particles, all current areas of exploration. Palmer is also exploring hemoglobin from annelids (i.e. worms), which consists of supramolecular assemblies six times larger than human hemoglobin.

All told, Professor Palmer’s research projects could have a significant impact in the world of emergency and transfusion medicine, the veracity of which is underscored by his recent funding successes.

“I’m very excited about these grants,” Palmer said, “and hopefully, several more are going to come through in 2017. These grants are going to help me move a step closer to being able to address a variety of issues in transfusion medicine and tissue engineering.”

Plugging in on the Moon