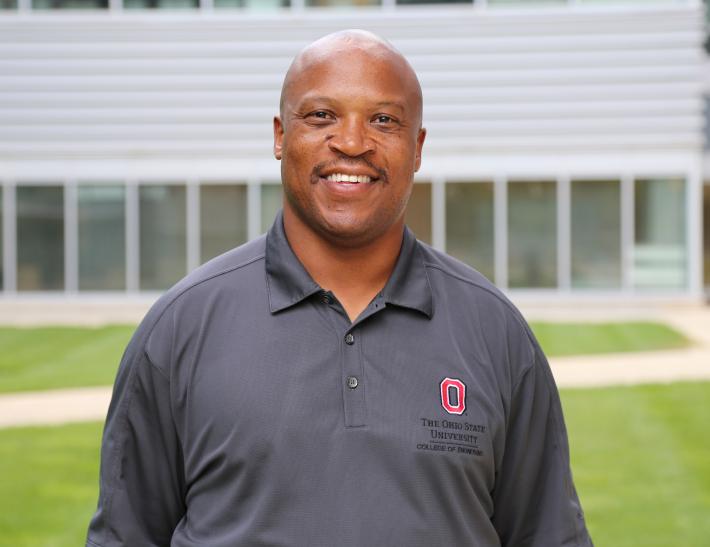 William White’s football career was the stuff of dreams—four years as a starting Buckeyes’ cornerback, followed by 11 seasons playing in the NFL. Yet, the accomplishment he values most is becoming an engineer.

And as he tells kids and future football hopefuls alike, anyone willing to work hard enough can follow in his footsteps and have a successful career—in STEM (science, technology, engineering, math and medicine).

During the summer following eighth grade, White was introduced to engineering when he accompanied his father to the GM Foundry in Defiance, Ohio, where both his dad and two of his older brothers worked.

“If you’ve never been in a foundry in July, it’s extremely hot, and the only air-conditioned office in the whole place belonged to an engineer,” White explained. “That was a pivotal moment for me. I didn’t know what an engineer did, but I thought, 'I’m going to have to work here, so that’s what I’m going to be.'”

Athletics came easier to White than academics and he learned the importance of practice at an early age. So when the engineer who inspired him suggested that he view homework as practice, his whole outlook changed.

“I got that concept because I never minded going out and practicing for basketball, football, whatever,” White said. “So I did that and turned from a D student to an A/B student.”

White's hard work on and off the field paid off when he was offered a scholarship to play for the Buckeyes and was accepted into the College of Engineering. He played as a starting cornerback during his very first football game and retained his first-string position for four years.

By the time he was a junior, White began to receive some recognition and started to think that an NFL career might be a possibility. But his primary focus remained on earning an engineering degree.

“I knew I couldn’t control someone tearing my knee out or getting hurt or anything like that, but I could control my grades and get my degree,” he said.

In 1988, the Detroit Lions chose White in the fourth round of the NFL draft. He played with the Lions for six seasons and was named the team’s NFL Man of the Year nominee in 1992, followed by three seasons with the Kansas City Chiefs and two with the Atlanta Falcons.

Today, White spreads his passion for STEM as midwest region vice president for Project Lead The Way. The non-profit aims to engage K-12 students and teachers in STEM by providing hands-on, project and problem-based curricula for students and training for teachers.

Across the ten midwest states White oversees, workforce depletion is a common issue.

The Buckeye engineer also loves to share his personal story, which resonates with kids from the inner city to rural communities.

“I like to challenge kids and let them know that your education is really the foundation of your life,” he said. “Success doesn’t come easy. Winning the national championship doesn’t come easy, you’ve got to put in work. If you’re willing to put in the work, you have the ability to do just about whatever you want.”

Maintaining close ties with his Buckeye family since graduation, White serves on the advisory boards of the Department of Materials Science and Engineering, and the Minority Engineering Program. And he's often invited by Ohio State Coach Urban Meyer to talk to the football team.

“I played 11 years in the NFL. In 1992, I was the highest-paid safety in the NFL. But I made more money outside the NFL than inside it,” he said.

Soon White will have a new favorite Buckeye to root for as his son, Brendon, has committed to join the Buckeyes’ 2017 recruiting class.

“There were a lot of schools that made him offers, Michigan State was first, then Notre Dame. Those are pretty high-end schools, not just in football but also their graduation rates,” White explained. “But when Urban offered him a scholarship, he cried. He’s very, very excited about it. But I keep telling him the education is what matters. That’s the career.”

“When he was a freshman/sophomore, he was following in my footsteps, because I had him and he wanted to be an engineer. Now he’s falling off the wagon,” White said with a laugh. “He and my daughter want to own their own architecture firm, so he’s doing business and she’s going to be an architect. That’s their game plan for now.”