The start of something smart

Imagine getting real-time roadway conditions and campus parking information from a single app as you drive to a Buckeyes home game. Or parking once and riding autonomous shuttles to shop and dine throughout Easton Town Center’s more than 30 acres. Think about smart traffic signals that help rapid public transit and delivery trucks stay on-schedule, and energy efficient street lights that deliver Wi-Fi. 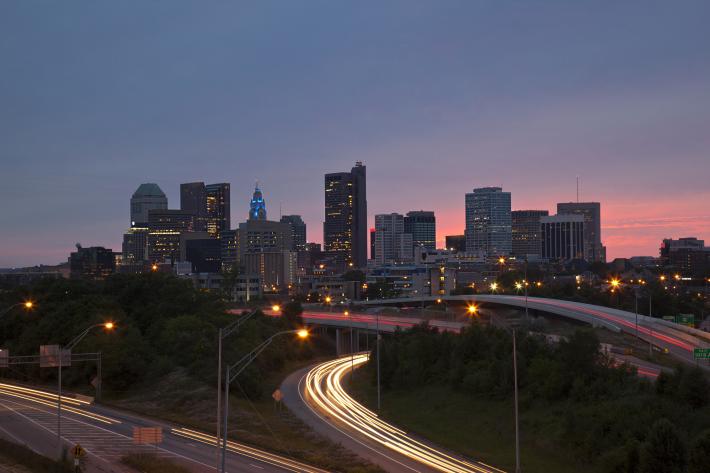 These are just some of the smart mobility solutions that central Ohio residents and visitors alike could see by 2019, thanks to Columbus being crowned the nation's Smart City by the Department of Transportation in June.

Researchers and facilities at The Ohio State University will play a central role as the collaborative Smart City team comes together under an unprecedented $140 million program to transform central Ohio into the nation’s premier transportation innovation region.

Collaboration between Columbus and local partners, including Ohio State as the primary research partner, helped the city outsmart 78 competitor cities.

Columbus will be awarded up to $40 million from the federal government to implement bold, data-driven ideas that make transportation safer, easier and more reliable. Also, Paul G. Allen’s Vulcan Inc. will award up to $10 million to support electric vehicle deployment and other carbon emission reduction strategies. Central Ohio businesses and public organizations have pledged an additional $90 million to the project, including $15 million from Ohio State.

“Ohio State worked with the City of Columbus on every element of the bid,” said Carla Bailo, assistant vice president for mobility research and business development at Ohio State. “We applied our leadership in research of connected and autonomous vehicles, as well as transportation systems and human behavior.”

“Encompassing all of this will be apps that provide real-time information so that we can move people around, in and out of the city much more efficiently,” said Bailo. “We're hoping to get Ohio State students deeply involved in helping with a lot of the app development.”

Upgrades will be focused in four areas of the city: the Commercial District around Easton Town Center, the Downtown District, the Urban Logistics District surrounding Rickenbacker Inland Port, the nation’s tenth most active logistics hub, and the Residential District in Linden, an underserved neighborhood located northeast of downtown Columbus.

Equal access for all citizens is a key focus of the Smart City Challenge. Linden—with an infant mortality rate four times the national average—was chosen as the residential district due to its numerous challenges, including low household income, a lack of major employers and poor access to healthcare, grocery stores and banking. Solutions such as smart street lights with Wi-Fi, sidewalk labs kiosks, an integrated payment system and shuttles will be deployed in Linden to demonstrate how next generation transportation technology can reconnect neighborhoods previously divided by transportation infrastructure and improve socio-economic challenges.

“The Linden area project is really exciting, because to me, smart mobility means using technology and data to improve people’s lives. And Linden is really an area where we have to do something as a society to improve the situation,” Bailo explained.

While some Smart City project plans are still being finalized, others are already underway.

Levent Guvenc, professor of mechanical and aerospace engineering, and a team of engineering researchers recently received a two-year $200,000 grant from the National Science Foundation to develop the Smart Shuttle, a unified, replicable and scalable architecture for automated driving in a smart city. The researchers will use a two-seat autonomous electric vehicle for initial research and testing prior to larger autonomous shuttles being deployed in the Easton Town Center shopping center.

Mechanical and Aerospace Engineering Professor Junmin Wang is working with multiple engineering and psychology faculty from across the university on a multidisciplinary $800,000 National Science Foundation funded Cyber-Physical Systems project to create a next generation, personalized, active vehicle safety control system that leverages recent advances in onboard computation and vehicle connectivity technologies.

Through its expertise in sensors, Ohio State will also play a major role in developing the initiative for a publicly available real-time traffic condition database.

Pilot projects will begin to be deployed in late 2017 and early 2018. As a microcosm of the city, Ohio State’s Columbus campus will serve as a testbed for many of these, including autonomous electric vehicle testing.

But as Bailo emphasizes frequently, Smart Columbus isn’t about implementing technology for technology’s sake. It’s about becoming the model for providing sustainable transportation services that reduce environmental impact and improve citizens’ lives—in a way that can be replicated across the nation.

“Smart City is all about how we are going to improve the environment, improve people’s lives and free time so they have more to spend with their families, etc. This is all really important,” said Bailo.