Excluding skin cancers, colorectal cancer is the third most common cancer diagnosed in both men and women in the U.S. and second leading cause of cancer-related deaths. 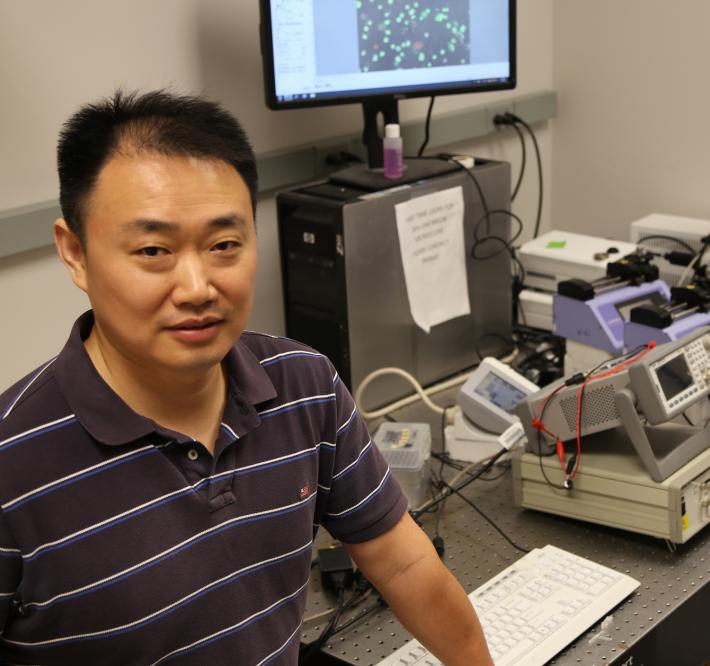 In most human cancers, a gene called TP53 is inactivated by mutation or deletion. The TP53 gene provides instructions for making a protein called tumor protein p53, a well-known tumor suppressor. Tumor cells missing one copy of TP53 are often missing a copy of the POLR2A gene, which may make them susceptible to a targeted attack.

While many unsuccessful attempts have been launched to restore p53 production in the body, He and Texas M.D. Anderson Cancer Center’s Xiongbin Lu have focused on POLR2A. In an April 2015 Nature article, they report that treatment that took advantage of POLR2A gene alteration completely eliminated tumors in animal models of colorectal cancer. The treatment is based on the delivery of low doses of alpha-Amanitin, a toxin found in the Amanita phalloides mushroom, to the tumor cells. The toxin inactivates POLR2A, which inhibits proliferation and survival of colorectal cancer cells.

However, He and Lu found a small fraction of colorectal cancer cells were resistant to the toxin. These drug-resistant cells are often called cancer stem cells (CSCs) or tumor initiating cells (TICs). A common feature of such cells is that they overexpress variant CD44 cell surface receptors, which regulate crucial processes such as cell differentiation, proliferation and migration. In related studies, they found that human breast CSCs can be effectively destroyed using chemotherapy drug-laden nanoparticles that target the variant CD44 receptors.

Like breast cancer, colorectal cancer originates in epithelial cells, so the researchers will use the NCI funding to test a combination therapy. They will determine if co-delivery of a-Amanitin and chemotherapy drugs with their nanoparticles targeting the variant CD44 receptors can overcome colorectal cancer cell resistance. The researchers also plan to study the combination therapy’s efficacy in treating breast and pancreatic cancers with TP53 and POLR2A alterations.

“Cancer drugs are inherently toxic, but also indiscriminate,” said He, “so this research is focused on developing better particles that can carry them to the tumor.”

The project, which began on July 1, will span five years.

Research reported in this article was supported by the National Cancer Institute of the National Institutes of Health under award number R01CA206366.

The content is solely the responsibility of the authors and does not necessarily represent the official views of the National Institutes of Health.