In the spirit of service

Here’s a constructive way to spend a lunch break at work: Sit around with a couple dozen co-workers to discuss a path to immortality.

It happened often at Moody Nolan in Columbus among designers and architects who brainstormed ideas for the Nelson Mandela Memorial Design Competition. 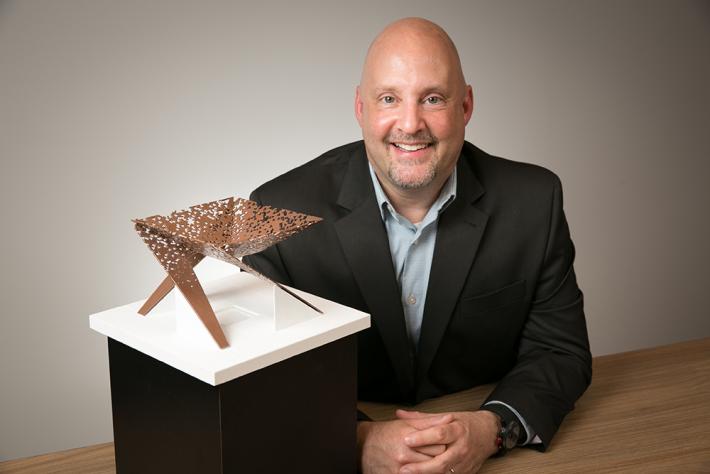 From those lunchtime chats over pizza, senior project designer and architect Brian Sell ’87, ’90 MA, emerged with an idea for a model ultimately chosen from among nearly 200 submissions.

His permanent memorial to honor the late South African social justice leader will rise from a hill overlooking the Pacific Ocean in Skylawn Memorial Park in San Mateo, California. Dignitaries such as President Barack Obama and former President Bill Clinton may attend the unveiling, tentatively scheduled for September.

“I was really happy with my entry, but I figured there were so many submissions that I almost forgot about it,” Sell said. “When I got the call that I won, my reaction was sheer amazement. Maybe this can have the power to change and enlighten people.”

Sell found inspiration for his piece in the Xhosa tribal name Rolihlahla, which Mandela’s father gave him at birth. It translates to “pulling the branch of a tree.”

“The idea of a tree came to mind early on,” he said, “so I started sketching these different ideas of branching out.”

A granite base of three tree branches reaches up to a bronze canopy perforated with computer-generated geometric shapes that provide shade amid dapples of sunlight. The intention is to give visitors a place to reflect on Mandela’s achievements and influence.

Twenty-seven metal bars — one for each year Mandela spent in prison — reflect the exact diameter and spacing of the bars in his cell and bring an element of interactivity. “We wanted people to be able to put their hands around the bars like he did,” Sell said.

The space inside the memorial replicates the size of Mandela’s cell, inviting visitors to experience the feeling of his confinement. Quotes from the anti-apartheid leader are inscribed in the base.


Moody Nolan founder and CEO Curtis Moody ’73 invited his designers to participate in the competition via email. About two dozen colleagues took up the challenge and began sharing thoughts over lunch. Sell culled many of his ideas from those discussions.

“It was kind of like exercising muscles we don’t get to use every day, our poetic muscles,” he said. “People eagerly donated their time for the chance to work on something exciting — and with free pizza to boot. We saw the worthwhile scale of the project and knew it would give great meaning to our lives.”

The experience, Sell added, “gave us something we can take forward in our work at Moody Nolan, no matter what the project.”

As the head of the nation’s largest minority-owned architectural firm, Moody — who like Sell studied architecture at Ohio State — was eager for his designers to take part in the competition. The “responsive architecture” of museums and memorials, he said, reflects the technological and cultural conditions of our times.

“I am proud and humbled to have Brian, one of our leading designers, be the creative force behind such an important landmark,” Moody said.

The Nelson Mandela Foundation, a nonprofit human rights organization, sponsored the competition in partnership with the NorthStar Memorial Group, which operates memorial parks and funeral homes. The San Mateo site was chosen for its proximity to the San Francisco Bay area, a hub of the anti-apartheid movement long before Mandela’s release from a South African prison in 1990.

“Brian’s design will inspire many future generations to provide service to one’s fellow human,” said Skylawn’s David Montgomery, one of the competition’s judges.

This story originally appeared in the May-June edition of Ohio State Alumni magazine.