Posted: December 11, 2013
Engineers at The Ohio State University are part of a research team contracted by the Defense Advanced Research Projects Agency (DARPA) to develop technology that dramatically reduces the time and space needed to manufacture biologics, such as insulin, and make them more accessible in the field.

David Wood, associate professor of chemical and biomolecular engineering, received $500,000 to adapt his intein-based protein purification system into a proposed, laptop sized device that would produce and purify a ready-for-delivery therapeutic protein in a few hours using only a few liters of water. The funding is part of a larger $7.9 million dollar contract with the Defense Advanced Research Projects Agency (DARPA), led by the University of Maryland, Baltimore County (UMBC).

“The new technology,” said Govind Rao, the principal investigator and director of UMBC’s Center for Advanced Sensor Technology, “would essentially shrink the biotech company’s footprint to the size of a small laptop computer, carried in a backpack, housing all the elements necessary to express, purify and analyze any target protein.”

The prototype would speed up the expression of the protein, producing it more quickly and efficiently by using a cell-free system.

Today, protein based drugs, which are used in the treatment of diabetes, cancer, and rheumatoid arthritis, among others, are made using cells suspended in large, stationary, tanks of several hundred liters or more of culture medium. Targeted proteins are recovered from the cells, purified, stabilized, put into delivery devices, and shipped to pharmacies and hospitals. All told, the process is extremely expensive, complicated and takes several weeks complete.
Although the technology is being researched and developed for DARPA, it could eventually be produced for the civilian patient population. 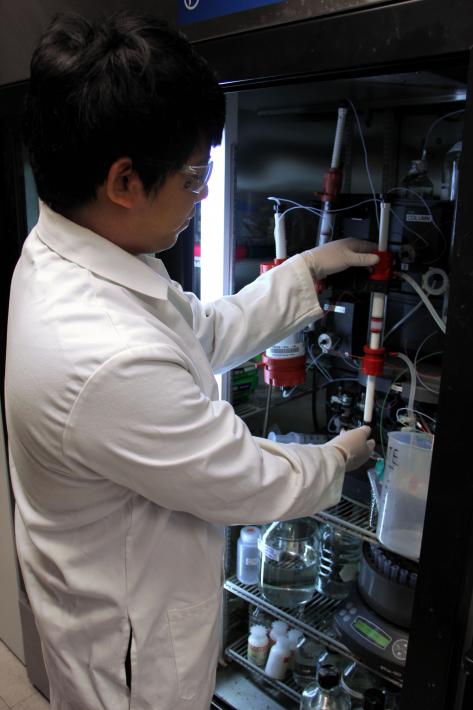 "The ability to produce single-dose protein drugs at minimal expense will allow for the development of highly specific therapeutics for very small patient populations,” Wood said. “These drugs have been impossible to develop economically in the past, but this device may enable truly personalized medicine, providing relief to those who have been previously left untreated."

One of the challenges in developing the device is the requirement for an extremely reliable method of purifying the products as they are synthesized. This high purity ensures the final dose of each drug is safe to inject into patients without risking an immune response.

Wood has been perfecting the intein-based purification system he developed as a graduate student for the past 15 years. It provides a general method that can be applied to any target protein, making it a single core platform compatible with the dozens of products the device will eventually produce.

"The potential impact of this device to medicine is only exceeded by its potential to accelerate pure research,” said Wood. “It will allow scientists to immediately move from the discovery of a new gene to the study of its product, without the lengthy delays associated with developing a purification process for the gene product."

According to Wood, his purification system will be used in the initial capture step of the device’s manufacturing process, during which 99 percent of the purification is completed. It is followed by polishing steps, which further purify the drug.

These views are those of the author and do not reflect the official policy or position of the Department of Defense or the U.S. Government.
Categories: FacultyResearch