Posted: December 19, 2013
Once a dirty word in the universe of cyber space, “hacker” has earned a more positive connotation and refers to someone who uses computer programming skills to solve problems.

Looking to find the best hackers in the nation, career college student networking service Readyforce partnered with The Ohio State University to host its 2013 Hacker Tour in Columbus. Readyforce made Ohio State a tour stop for the second consecutive year, thanks to the university’s status as having one of the top computer science and engineering programs nationwide.

More than 50 Ohio State students, from the freshmen to graduate level, competed in the Top Campus Coder challenge. Zheng Li, a graduate student in electrical and computer engineering, was only the second student ever to solve the challenge, with a time of 16 minutes.

Sponsored by leading app search service Quixey, the Top Campus Coder Challenge was designed to be solved in less than 60 seconds. After visiting 15 other schools, however, only one student had solved it – in any length of time. At the tour’s conclusion, Li remained one of just eight students to conquer the challenge. 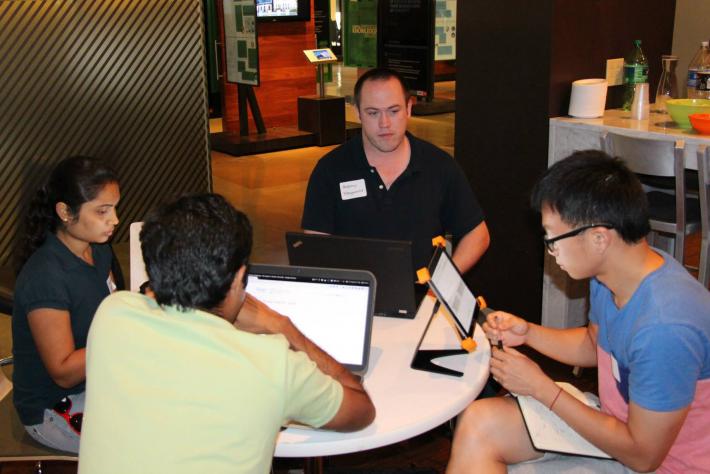 In addition to the competition, the Readyforce Hacker Tour connects students to jobs and internships at startups across the country. Two Ohio State engineering students landed jobs as a direct result of their participation in the 2012 Hacker Tour.

Nick Knudson, a 2013 graduate with a BS in electrical and computer engineering, works as a developer at One in San Francisco. One founder Michael Callahan was the keynote speaker at the Ohio State Hacker Tour stop in 2012.

Computer science and engineering alumnus Maxwell Elliott (’13) connected with 25 companies and received five job offers after he created a profile on Readyforce’s website. He began his tenure as a software engineer on the West Coast at Originate and now works for Gumroad.