The Ohio State University College of Engineering’s Buckeye Current electric motorcycle team—along with UK native and world-renowned rider Rob “The Bullet” Barber—finished third in their first-ever appearance at the world-famous Isle of Man Tourist Trophy (TT) races. The only U.S. collegiate team to compete in the TT Zero, Buckeye Current steered to a podium finish with an average speed of 90.4 mph, besting both professional and collegiate competitors. 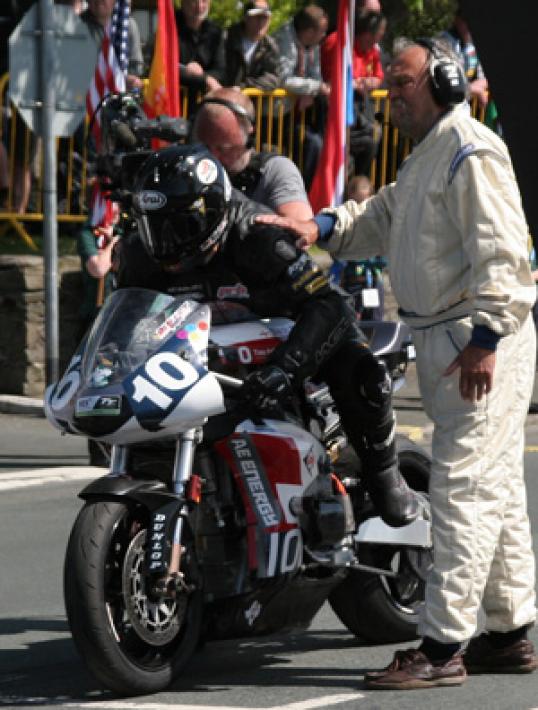 The Isle of Man is a self-governing dependent territory of the British Crown, located in the Irish Sea between the islands of Great Britain and Ireland.

“This is a fantastic accomplishment for a first-time, student-run team and places the Buckeye Current as the number one university team in electric motorcycle races,” says Giorgio Rizzoni, mechanical engineering professor and director of the Center for Automotive Research at The Ohio State University, where the team is based.

"We didn't imagine how incredible this place was – the atmosphere, the racing, the challenge,” said Aaron Bonnell-Kangas, Buckeye Current team member and an electrical and computer engineering major. “The total development time of our bike was just over nine months, from conception to completion with a budget at a fraction of the professional teams that bested us. Yet we became only the second collegiate team to earn a podium finish, and are the only one to break 90 mph on an electric machine around the Mountain Course."

The team is already planning improvements and modifications for their next vehicle in order to increase speed and decrease lap times at next year's TT Zero. Recruiting the next crop of talented team members is vital.

"We have a few students graduating, but there are always more developing leaders at the university to train and teach,” said Julia Cline, co-team leader and an electrical and computer engineering major. “Together, we know we can continue to do even better."

Following the race, the team also was awarded the Motul Award for Technical Performance. Last year the award was given to British motorcycle manufacturer Norton, and the 2011 award went to U.S.-based MotoCzysz.

The team also thanked their many sponsors for making their race dreams possible. The Honda/OSU Partnership, a bilateral collaboration between Ohio State and Honda of America Manufacturing supporting initiatives in education, research and public service, and Advanced Electronics Energy, are Buckeye Current’s largest sponsors. RRW Engineering, Aaron Equipment Company and Commercial Vehicle Group, Inc., among many others, have also provided support to the team.

The team's next competition is August 18 at the TTXGP in Indianapolis, Ind.

AI research is booming and opening doors for students