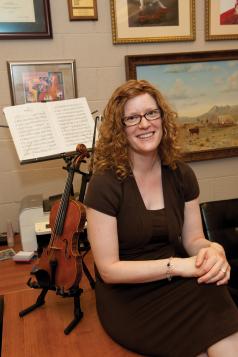 In a ceremony last week, Jessica Winter, associate professor in Chemical & Biomolecular Engineering and Biomedical Engineering, was named 2012 Inventor of the Year by TechColumbus, a public-private partnership whose mission is to accelerate the advancement of Central Ohio’s innovation economy. The accolade was one of TechColumbus’ 2012 Innovation Awards, a program that recognizes forward-thinking individuals, companies and technology teams in the 15-county region of Central Ohio for their achievements and contributions in technology leadership and innovation.

Winter, founder and interim CEO of Core Quantum Technologies (CQT), an OSU technology commercialization company, received the award for her work on nanoparticle materials. CQT’s product, MultiDot, is a group of semiconductor nanoparticle quantum dots encapsulated in polymer-based micelles that allow researchers to continuously track tagged molecules with greater brightness, longevity and stability than currently available technologies. The technology has applications in industries such as medical diagnostics, which will enable medical researchers to attach them to specific cell structures and better identify and understand disease progression.

A panel of independent judges from the Central Ohio community selected the winners for the 2012 Innovation Awards under the theme, Beyond Convention, which aimed to honor awardees for their unconventional thinking, keen vision and dedicated execution to creating life-changing, innovative solutions.

“The Inventor of the Year Award recognizes a Central Ohio innovator who has achieved the highest standard in a technology innovation,” said Tom Walker, CEO of TechColumbus. “Jessica Winter’s innovative research in quantum dots technology exemplifies our goal to showcase a Central Ohio individual whose product development and commercialization efforts are poised to tap a huge market potential and could ultimately translate into economic growth and new job opportunities in the Central Ohio area.”

“We have a tremendous amount of innovation happening every day in the College of Engineering. The world-class research led by our faculty and staff is paving the way for technologies that can be commercialized into products and services that not only impact the world we live in, but also generate new revenue streams for investing in faculty, infrastructure and scholarship growth here at Ohio State. My congratulations to Jessica and to all of our faculty and staff selected as finalists for these awards,” said David B. Williams, Executive Dean of Professional Schools and Dean of the College of Engineering.

In addition to the TechColumbus 2012 Inventor of the Year Award, Winter was also the recipient of the 2012 Early Career Innovator of the Year Award in October by OSU. Her company, CQT, finished in first place in the 2012 Ohio State University Business Plan Competition sponsored by the Fisher College of Business and has raised more than $320K in funding in the past year. Winter is the author of more than 30 peer-reviewed journal articles and has filed four provisional patents and one full US/PCT patent.