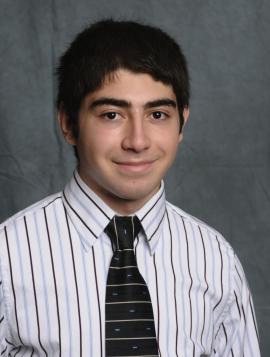 The Undergraduate Fellowship Office announced that Marc Khoury, a graduating senior in computer science and engineering, has been named a 2012 Churchill Scholar.

The Winston Churchill Foundation annually awards fourteen scholarships to graduating seniors and recent graduates who demonstrate exceptional academic talent, outstanding personal qualities, and a capacity to contribute to advancement in science, engineering, or mathematics.  The scholarship supports one year of graduate study in a relevant field at the University of Cambridge in the United Kingdom.

Khoury began conducting research as a freshman under the guidance of Dr. Rephael Wenger, where he studied isosurface meshes, which is a tool for data visualization. In 2009, his work was published and he delivered a presentation at the leading conference in computer visualization.

Khoury's research and industry experience allow him to approach complex topics in computational geometry from a new angle. He has taken part in mathematics research at Ohio Wesleyan University, and this past summer, he completed an internship in with AT&T Labs in their information visualization group.  He also spent fall quarter with Amazon.com as a software development intern in their fraud department.

Outside the laboratory, Khoury has participated in a variety of science-related outreach activities.  He has served as a student advisor on the undergraduate engineering honors committee and on the department of computer science and engineering’s semester task force. In addition, he served as a peer contact for the undergraduate research office and as a tutor at Ohio State’s math and statistics learning center.

Khoury will pursue a master's of philosohpy in advanced computer science at Cambridge, where he will conduct research in geometric modeling under Dr. Neil Dodgson. In the coming years, he hopes to pursue a doctoral degree in computer Science at University of California, Berkeley or Stanford University.  His ultimate goal is to become a computational science professor at a major university.