All dates for this event occur in the past.

NASA’s Space Nuclear Propulsion (SNP) project is developing the technologies required to advance the readiness of nuclear thermal propulsion (NTP) and nuclear electric propulsion (NEP) systems to the level where they can be credibly considered for a range of human missions, including those to Mars. In both systems, many of the critical subsystems are relatively immature and present signiﬁcant challenges when considering the requirements that must be met to realize a feasible spacecraft design.

The primary NTP issue revolves around the temperature at which the nuclear fuel must operate to accelerate the propellant to the required exhaust velocity for a human Mars mission. The fuel must not only survive at temperatures far greater than what is experienced in terrestrial-based nuclear reactors, but it is also exposed to hydrogen propellant, which is chemically reactive at elevated temperatures. The subsystems comprising an NEP system require increasing power throughput by orders of magnitude relative to EP system ﬂight- or ground-based technology demonstrations completed to date. Such systems must also operate for extended periods of time with no maintenance. For both NTP and NEP, there are signiﬁcant challenges associated with performing ground testing at relevant scales and power levels making it diﬃcult to mature technologies and to develop an experimental basis to support modeling and simulation activities.

This seminar will present the challenges of developing an in-space nuclear propulsion systems and discuss some potential development paths presently being pursued by NASA.

This event is presented by the Office of Knowledge Enterprise and the Department of Mechanical and Aerospace Engineering. 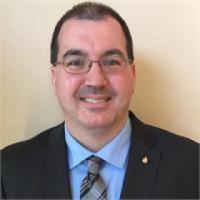 Dr. Kurt Polzin is Chief Engineer for Space Nuclear Propulsion at NASA’s George C. Marshall Space Flight Center (MSFC) in Huntsville, AL. He received his B.S. degree in Aeronautical and Astronautical Engineering from The Ohio State University in 1999 and his Ph.D. in Mechanical and Aerospace Engineering from Princeton University in 2006. Dr. Polzin joined the Propulsion Research and Development Laboratory at NASA-MSFC in 2004 as a propulsion research engineer. Prior to his current position, he was the Space Systems Team lead for the Advanced Concepts Oﬃce performing conceptual spacecraft system and mission design and analysis. He is also an adjunct faculty member at the University of Alabama in Huntsville where he has taught in the Physics and Mechanical & Aerospace Engineering departments. He has co-authored well over 100 technical publications on the testing and modeling of electric and space nuclear propulsion systems and components and is lead author of the monograph Circuit Modeling of Induc1vely-Coupled Pulsed Accelerators. Dr. Polzin is a Senior Member of the Institute for Electrical and Electronics Engineers (IEEE) and an Associate Fellow of the American Institute of Aeronautics and Astronautics (AIAA), in which he also serves on the Electric Propulsion Technical Committee and as the Southeastern US Regional Director.